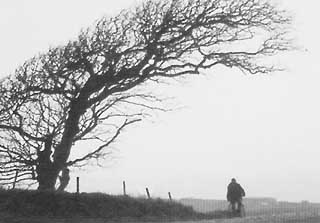 Fair warning: The War Zone can be excruciating to watch. Dealing as it does with incest and the tribulations brought unto a tightly knit British family in their wind-and-rainswept Devon farmhouse, it can be a harsh task to keep one's eyes focused on the sporadically graphic horrors onscreen. On the other hand, British actor Tim Roth's (Pulp Fiction) debut as a feature film director is a small, dark gem of a film, relying more on atmosphere and the interpersonal dynamics of rural family life to give it a cutting edge sharper and more menacing than even the keenest razor. The War Zone sings, but it's a banshee's lullaby, full of the hiss of betrayal, misdirected lust, and very bad mojo. The film opens on -- and maintains, to some extent -- a loving note. A family, recently relocated from London to the lush hills of the Devon countryside, awaits the arrival of a new addition. Mum (Swinton), Dad (Winstone), and their children, ripe, 16-year-old daughter Jessie (Belmont) and the troubled, lonely Tom (Cunliffe, looking like a more irritable, junior version of Britband Primal Scream's Bobby Gillespie), mill about the kitchen table chatting, drinking wine, and waiting for the frequent storms to pass. As Mum washes Dad's back with a sponge, he haggles over the phone, attempting to purchase an antique dresser to refinish and sell. The scene is so fairy tailored in its normalcy it seems straight out of Tolkien. Matters take an abrupt shift in tone, however, when Tom, returning from a shopping trip with Mum, inadvertently spies his sister and father in the bathtub together. Roth, to his credit, shows us nothing but the boy's face as he falls away from the outside window, slumping down in the spattering rain like a broken marionette. When he confronts his sister, she offers only denials, until at last Tom, video camera in hand, confronts her with inarguable truth. As expected, things go from bad to worse to unspeakable in a heartbeat. Roth's film is notable for several things, chief among them its gorgeous cinematography, which manages to paint these wounded people in a blue-black shade that echoes the emotional and psychological shadows within themselves. When it's not breathtaking -- the hills, the dales, the very farmhouse -- it acts as a secretive, silent partner in crime (the scene in which Tom employs the video camera is almost too much, but Roth, conscious of the necessities of visual storytelling, manages to leave us outraged while placing us directly in Tom's mindset). It's impossible to single out a particular performance for praise -- they're all purely riveting -- but Belmont's Jessie, abused, angry, and above all silent, is flat out one of the best young person's performances I've ever seen. The same goes for Cunliffe. “Uncompromising” is the word that first came to my mind after seeing The War Zone. To that l'll add spellbinding, distressing, and possessed of a dark and terrible beauty and leave it at that.