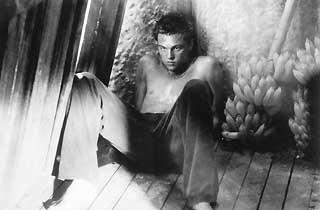 Can we all just get together, once and for all, on the ought-to-be-obvious notion that paradise is within and not without? Please? Work with me people. The idea of paradise -- what, where, and who it might be -- is at the crux of this, the fourth film from the team that previously brought us Shallow Grave, Trainspotting, and A Life Less Ordinary. Director Boyle, producer Andrew MacDonald, and writer John Hodge (here adapting from the bestselling 1996 novel by Alex Garland) trade in the multifaceted leading man Ewan McGregor for the slightly less interesting DiCaprio, although you have to give Leo credit -- his character here is the polar opposite of the charming wag Jack Dawson in Titanic, and as such, a bit of a box-office gamble. As Richard, the young backpacker who wanders into Sinville, aka Bangkok, Thailand, and never quite makes it back, DiCaprio oozes self-interest and more than a hint of self-loathing. It's a meaty role, chock-full of nasty turns and dalliances. Richard cheats, lies, steals, and gets many people killed or injured throughout the course of the film, and as a metaphor for Western tourism (those wavy blond locks and the insouciant smirk fairly scream Ugly American), it ain't half bad. It takes more than a clunky metaphor with a six-pack and a smile to make a good film, though, and before long you find The Beach running aground amidst pilings of plot contrivances and muddled philosophical questions. What? Me, spoil paradise? Perish the thought. In Boyle's film, the questing Richard is seeking -- what else? -- adventure, and, to reference backward, a life less ordinary. He finds it when a grubby co-traveler named Daffy (Trainspotting's foul Begbie, Robert Carlyle) tells him a tale of a mythical beach on an island surrounded by sheer cliffs, unknown to the tourist trade at large. After Daffy offers him a map and then promptly goes about redecorating his $2-a-night flat with his own precious bodily fluids, Richard enlists the aid of Etienne (Canet) and Françoise (Ledoyen), a pair of likewise adventure-minded young French tourists, and the trio sets off to discover the source of the mystery. What they find is an island that's part Lord of the Flies, part Home Grown, and part Sony PlayStation's Echo the Dolphin. And sharks. Lots of sharks. Richard and his pals (with Francoise quickly becoming something more than that) stumble into what at first appears to be Colonel Kurtz's Cambodian pleasure palace, minus Dennis Hopper but with more hippie lovin' than you can shake a Game Boy at. (Boyle places several of the beeping timekillers around, just so we get the conflict between la paradiso and the evil encroachment of civilization. I think.) But all's not well at Zendik Island, of course, and before you know it, an outcast Richard is flashing back to Apocalypse Now and turning into a life-size video-game parody of himself. Boyle's film is crammed full of hoary ideas on the nature of paradise and mankind's innate ability to fuck up even the most revelatory of situations, but it's hobbled by odd plot contrivances and some less-than-stellar acting from DiCaprio. This Boy's Life it ain't. Still, it's a rollicking two hours, and cinematographer Darius Khondji (The City of Lost Children, Seven) clearly has a ball with the lustrous look and feel of the film. On a side note, the Thai government is still rankling over the crew's “mistreatment” of the Phi Phi Le island where the film was shot. Life imitating art, or vice versa? Paradise: Bah, humbug.