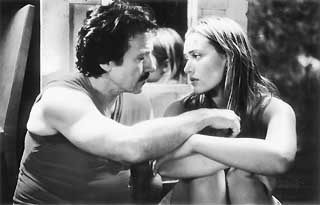 I feel somewhat of a turncoat in regard to Jane Campion's new film. After the rousing, invigorating triumphs of Sweetie and The Piano, it seems disingenuous of me to tear into a filmmaker as obviously talented as she, but, my goodness, what an awful, muddled load of codswallop Holy Smoke! has turned out to be. It's not just bad, it's disappointing, and I mean that in the strictest parental version of the statement -- “Jane, we're very, very disappointed in you.” Confused and lacking a tangible emotional center, Campion's tale of a sleazy cult deprogrammer and his voluptuous Aussie charge is chock-full of half-baked statements, notions, and scenes that seem as though they were culled from some creepily conservative, Pat Robertson-esque take on what a cult implies. For the record, joining an ashram in India and finding spiritual enlightenment among the holy men is a far cry from, oh, Jim Jones and his ilk, but Campion's tale seems to lump all those disparate groups in together. Surely she's not serious. Winslet, who ought to get a firm pat on the back and a cheery thumbs up for choosing a pair of considerably less enthusiastic roles in the wake of her Titanic adventure, plays Ruth, the youthful idealist in question. As the film opens, she's packing it through India with a family friend in tow, merrily seeing the sights (starving street urchins and whatnot) when she takes in a guru's ceremony and finds herself -- literally -- transformed. Campion actually shows us that sanctified third eye fluttering open as her pal kneels beside her, aghast and fretful. Though her friend pleads with her to return to Australia, Ruth instead chooses to stay, though she's soon bamboozled back to the motherland by her Mum (Hamilton), who convinces her that her father is dying. It's a ruse, of course, and one with which Ruth is none too pleased. The family has, in the interim, hired a hotshot cult deprogrammer from America to fly in and re-lube her mental cogs. As it's Keitel in the role, you can bet the gears in Ruth's mind aren't the only things that are going to get stripped, and at least in this arena, the film does not disappoint. Keitel plays the unctuous P.J. Waters as a cross between an aluminum siding salesman and a Gator-era Burt Reynolds, all greasy black hair looping back over his oily brow, his craggy visage battered by a woefully obnoxious mustache straight out of “The Bad Man Primer.” Sequestering himself and Ruth away in a remote shack in the outback, Waters proceeds to deprogram with libidinous gusto, though by the end of the film the cunning Ruth (and Campion) has him traipsing about the back country in a tatty red dress and lipstick (surely a vision you're not soon likely to forget). If the film is a disaster, and it is, then Keitel is its epicenter. He devours the scenery wholeheartedly and with nary a Tums in sight, and, frankly, it's all a bit ridiculous. Winslet, however, is radiant and restrained and if you absolutely must go see the film, then for God's sake focus on her and then perhaps blink a lot when she's off-screen. All great directors stumble somewhere down the line, most more than once, and so Holy Smoke! is a forgivable error, but an error nonetheless.