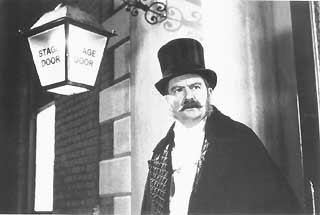 Naked this isn't. British film director Mike Leigh is known more for his love of dark improvisation and interpersonal dramas (Secrets & Lies, High Hopes) than his dalliances with the stage, but the fact is that Leigh came from a thoroughly theatrical background, having embarked on a career in London's theatre district long before he segued -- quite smoothly -- into films. Knowing that, it's not such a surprise that his new film is a loving and lovely ode to the hoary theatrics of those reigning kings of Victorian tomfoolery, W.S. Gilbert and Arthur Sullivan. Between them, the pair produced 14 rightfully beloved operettas (The Pirates of Penzance, H.M.S. Pinafore, etc.) that remain the bane of young people trotted out for an evening on the town with mom and dad to this very day. Leigh's remarkable film traces only a brief span in the G&S collaborative timeline, though. It's less a history of the men than it is a hysterical (and intricate) tribute to the salad days of London theatre, when the Savoy Theatre (constructed, by the way, with the proceeds from Gilbert & Sullivan's plays) ruled over all, and an evening before the footlights meant watching to make sure your eyebrows didn't singe. The film opens in 1884 as the pair's newest -- Queen Ida -- is enduring a severe beating at the hands of the British press, which has begun to revile librettist Gilbert's (Broadbent) hackneyed “topsy-turvy” scenarios, so skewered because they continually take stories which are, as Sullivan (Corduner) notes, “rich in human emotion and probability” and then subvert them with the trinkets and baubles of magic, fairies, and potions. Gilbert, a stuffy, heaving, straight-laced icon of glottal Victoriana if ever there was one, is nonplused at having his hard work dismissed as piffle. He's even more outraged when his partner Sullivan, the composer and hedonist (he sails off for “the continent” at one point to dally in a spectacular French whorehouse) agrees. “I simply cannot write any more of these soufflés,” he hisses, and even as Leigh's film begins it seems it's ending. With a two-hour-and-40-minute running time, this is obviously not the case, and salvation -- in the form of a half-glimpsed trio of Japanese ladies on display in Picadilly Circus as part of some bizarre cultural exchange -- is at hand. Struck across the brow by the dueling glove of inspiration, Gilbert throws himself into a totally new operetta: The Mikado, which will become their greatest triumph ever. Topsy-Turvy admittedly takes a while to get up to speed. Leigh lets his gaze wander, with seemingly aimless abandon, over the backstage shenanigans of the Savoy regulars, the infights and backbites, and the day-to-day rituals of Victorian theatre before finally settling on his ultimate story, the creation of The Mikado. But what a story it is. Full of dry, wry wit buoyed by the rich, perfectly amazing performances of Broadbent and Corduner (as well as a lengthy host of others), and wrapped in a wealth of period costumes and sets, Topsy-Turvy is wildly entertaining, Shakespeare in Love minus the Bard and the babe, but with substantive style to burn. It's an atypical outing for Leigh, certainly, but it's also one of his best, the polar opposite of films like the nihilistic screed Naked and twice as clever. 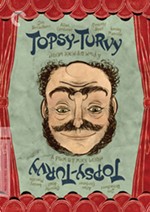 Topsy-Turvy
Notes on an Englishman