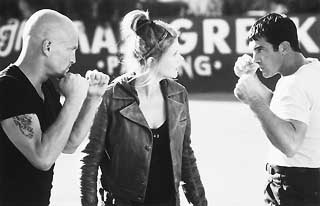 Play it to the Bone

If any Tom, Dick, or Harry off the street had directed this movie, it would have to be acknowledged as a bad miscalculation. However, since it was written and directed by Ron Shelton -- the modern king of smart, funny, and knowing sports movies, who has such titles as Bull Durham, Tin Cup, and White Men Can't Jump to his credit -- Play It to the Bone sinks to the level of a disappointingly bad miscalculation. Thoroughly predictable, the film never finds its unique twist on the familiar boxing story about a misbegotten palooka who gets one more chance to prove his worth in the ring. This time, we have two over-the-hill palookas, Cesar (Banderas) and Vince (Harrelson), who are offered an opportunity to fight each other as last-minute undercard replacements for a heavyweight title match. Built into the contract is the promise that the winner will have a shot at a middleweight title bout. In order to get to Las Vegas from L.A., the men resort to the other thing they have in common -- Grace (Davidovich) and her muscle car. Grace, who is Cesar's girlfriend and Vince's ex, has plans of her own, but still, she is the biggest fan either man will ever know. Unfortunately, the major portion of the movie is taken up with the road trip to Vegas, which is where the story bogs down. We learn some of the backstories that got these characters to this point in time, but it's all rather sketchy and insufficient for helping us get a handle on who they really are. Vince has had a rocky life ever since a title fight ended in a draw, and during his last car crash he literally saw Jesus, who now comes to him in frequent visions. Cesar confesses that after a disastrous bout, which the promoter accused him of throwing, he experimented with homosexuality for a while, which of course throws Vince into a tizzy thinking that his friend is a “fag.” But, as is typical with this movie, potentially interesting elements are thrown into the ring only to be left there rotting like yesterday's gym shorts. Into this mix comes Lia (Liu, of Ally McBeal fame), who has a fast-and-furious tumble in the hay with Vince and then sticks around for the seemingly sole purpose of annoying the hell out of everyone. Banderas and Harrelson, despite the underdevelopment of their characters, are good in their roles, each of them capable of the strong physicality demanded by their parts. Davidovich, unfortunately, is not on the level of some of Shelton's previous female protagonists (Susan Sarandon in Bull Durham, Rene Russo in Tin Cup, and Rosie Perez in White Men Can't Jump), who seem to become the mitigating factors in the director's sports films. The scenes in Vegas are played for all they're worth. Not only are the fight scenes well-filmed, but the social aura surrounding the scene is especially on point. Robert Wager as the hotel owner, along with Tom Sizemore, Jack Carter, and Richard Masur as the promoters, and a host of stars (Rod Stewart, Kevin Costner, James Woods, Tony Curtis) in cameos as themselves add some of the delicious flavor that the movie is otherwise begging for. Play It to the Bone does not live up to its name. It's more like White Men Can't Box, Either. 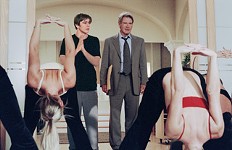