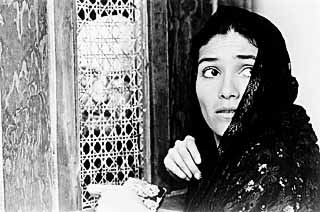 “Thank God I didn’t use Easy Off,” exclaims Esperanza (Heredia) during her confession to the parish priest about her vision of St. Jude appearing and speaking to her from the window of her grimy oven door. Comic moments such as this are frequent in this 1998 Mexican film (with English subtitles). A beguiling tale about love and faith, Santitos is part drama and part comedy, part magical realism and part mystical melodrama. Anchored by a splendid performance by Dolores Heredia, who appears in almost every frame of the film, Santitos depicts the odyssey of a small-town Mexican widow who searches for her absent daughter. St. Jude appears to Esperanza shortly after the mysterious death of her daughter during a tonsillectomy and tells Esperanza to seek her child in “la casa rosa.” Independently deciding that her daughter was kidnapped into white slavery, Esperanza first digs up the grave, and then goes to work as a maid in a local brothel. Information there leads her to a “pink house” in Tijuana, where she enlists in the world’s oldest profession (wouldn’t any mother?). At a wrestling match she falls in love with one of the contestants, a burly guy who never takes off his mask. Add to this tale a transvestite madam, a soap-opera-loving priest, a creepy hoodlum, and a cathouse horse and you have the makings of a very surreal Catholic soap opera. Mexican film producer Alejandro Springall (Cronos) makes his feature directing debut here and John Sayles was one of the film’s producers. The film won the Latin American Cinema Award at the 1998 Sundance Film Festival and received a blink-and-you’ll-miss-it release earlier this year. – Marjorie Baumgarten (2000-11-03) 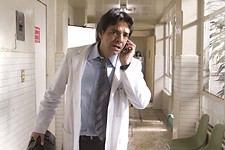 No Eres Tú, Soy Yo
In this Mexican romantic comedy, a man only discovers his true love while pining for the one he lost.