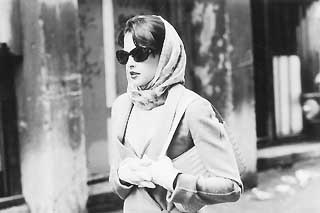 Eye of the Beholder

It took me some time after viewing a midmorning press screening of Elliott's (The Adventures of Priscilla, Queen of the Desert) new film to decide whether I had just witnessed some stunning new breed of psychological thriller or a movie so shrouded in self-absorbed confusion that it was barely intelligible at all. More often than not, critics can walk out of the theatre with at least some semblance of what they're going to say already forming in their mind's eye, if not on their lips. Much of this ever-ready verbiage has to do with deadlines and other journalistic mindbombs, but more often than not I exit screenings with my bon mot pistol judiciously cocked, if not quite sighted. Yet. Eye of the Beholder was troubling, though, for several reasons, not the least of which is that it's based upon a novel (written by Marc Behm in 1980) I hadn't even heard of. In any case, not having been familiar with an adaptation's source material should make little, if any, difference -- a solid film carries its own weight and is entirely its own creature. Still, sitting through the film was an exercise in confusion. I kept thinking that I'd missed something somewhere, or perhaps that the editor -- in this case Sue Blainey, also of Priscilla -- had run amok and excised some important expositional scenes in favor of more atmosphere (of which the film has loads). Looking back with the benefit of six or so hours or reflection, it's become clear that Elliott and his crew have fashioned a genuinely surreal work, albeit one that's grating in the way it plays with viewers' heads. Eye of the Beholder, which deals with a mysterious British intelligence agent and his obsessive love for his psychopathic female quarry, devolves into a surrealistic, emotional pillow fight between McGregor, as the agent, and Judd, as the wicked, repressed Joanna Eris. Even Marvin Gaye couldn't tell you what's goin' on here. The Eye, as McGregor's character is called, is a man who has lost his wife and child and, we are to presume, his sanity to the game of covert surveillance, the high-tech sort of which is his specialty. As he ducks behind masonry with a softly whispering photo-gadget lodged in his eye, he looks a lot less like the hunter than the prey, and in his mind, he is. Although we're only ever given a smidgen of background on this man's family, or how, exactly, they vanished from his life, Elliott piles on scene after scene of the Eye carrying on conversations with the shade of his missing daughter (Is she dead? Is this a ghost? We're never told), while Judd's character flees across the country killing people and then purging the evil inside with lots of shuddery “Merry Christmas, Daddy”s that make you want to go read the novel and damn the movie. The film, like the Eye's psyche, is impenetrable and more than a little daft, and though Elliott, a wonderful director when he's on top of things, struggles to keep things above board, there's too much vagueness in the film to hold your interest. Even Marius De Vries' excellent, brooding score and Guy Dufaux's (Jesus of Montreal) chilly cinematography can't keep up with the scarecrows on screen. I almost have the feeling that was Elliott's intention, though he's doing no one any favors by mimicking mental collapse with this cloudy, obscurely stylized vision. One for a rainy day and a Valium, this is slow-melting psychometrics at their worst, and a clear misfire for Elliott. 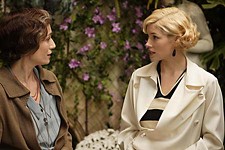 Easy Virtue
In this adaptation of an early Noël Coward play, Jessica Biel is the American newcomer whose brash attitudes disrupt the British decorum of her new mother-in-law (Kristin Scott Thomas).