To say that I wept copiously during My Dog Skip, the feature adaptation of Willie Morris' ode to his childhood pup, is not by itself an endorsement of the picture's quality. Dog movies = waterworks in my book; I'm a guy who can get misty over an Alpo ad. Something about those damnably adorable doggie snouts and waggy tails, that puppy love that abides through all trials and tribulations, and, of course, Hollywood's shamelessness at manipulating those qualities for sentimental effect, just loosens the seal on my old water works. Indeed, Skip left my shirtfront soggier than any pooch movie since The Incredible Journey. Yet it also left me irked, for in spinning its tender puppy tale -- boy gets dog, boy loses dog, boy gets dog back -- the movie doesn't so much tug at your heart as give it a series of vigorous yanks. Screenwriter Gail Gilchriest and director Jay Russell play darn near every scene like it's the end of Old Yeller, all tearful close-ups and swelling strings on the soundtrack. It starts about 15 minutes into the movie and from then on, both major and minor set-pieces are delivered with the same dramatic weight. The filmmakers seem earnest in their presentation of all this drama, but they simply overdo it, as they do with their portrayal of Skip. They work so hard to make Morris' Mississippi mongrel courageous, faithful, and wise, he comes off as a mixed breed: part Old Yeller, part Atticus Finch. Skip takes on despicable moonshiners single-pawedly, scampers back from death's doggie door at the sound of his master's voice, and is such a model of racial brotherhood that the black folks in Yazoo all stop to wave at Skip whenever he trots by. Now, that sort of incident may have been rendered on the page with grace, but on the screen here it's laid on with a trowel. And it isn't necessary. The picture would be abundantly charming without all the thunder and drama. The setting, Yazoo City in 1942, is idyllic, a small town of tall trees and friendly neighbors, and so warmly photographed by James L. Carter that it glows. Young Willie is given ample appeal by Malcolm in the Middle's Frankie Muniz, whose irrepressible smile conveys his loving spirit and profound affection for Skip. And Skip is, as Morris would have us believe, one helluva hound, the kind of feisty, scrappy, devoted dog that would inspire a kid to love him -- and write a book about it years later. Without question, this is a sweet, sweet movie; it's just one that celebrates the bond between a boy and his dog with heart and a heavy, handy hand. 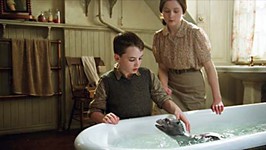 The Water Horse: Legend of the Deep
This adventure fantasy about a boy's involvement with a mysterious animal is also a period story about childhood anxieties. 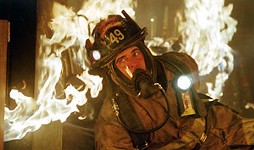 Ladder 49
No scorcher this, but nonetheless a sturdy tribute to firefighters and male camaraderie.