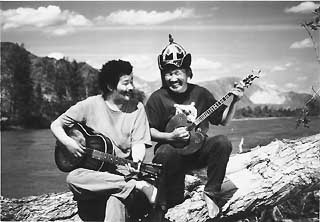 Nobel Prize-winning physicist Richard Feynman; the musical technique known as “throatsinging” popular in the tiny upper Mongolian region known as Tuva; and one big, black, blind guy playing the blues: Some people and events are just waiting for a documentary to coalesce around them. The remarkable Genghis Blues is one such film. It's the type of story that if you heard it on the street might seem too improbable to believe, or too bizarre for its own good, but once seen it sticks to the memory like synaptic epoxy. It's a wonderful, near-perfect example of the documentary form, overflowing with outlandish coincidences, eerie simpático, and loads of heart. It's hilarious, touching, historically relevant, and gripping. And it's all true, every note of it. The debut feature by the brothers Belic (brother Adrian produced, Roko directed and both worked the camera) centers on San Francisco bluesman Paul Peña, a blind Creole-American behemoth of a man with a wild, tangled mane of curly black hair and a penchant for passing his late-night hours scanning the dial of his shortwave radio. As Peña explains during the film's opening moments, one night he encountered a signal from the former USSR, broadcasting a strange form of folk music he'd never heard before. Entranced, he listened for hours to what he later learned was Tuvan throatsinging, an ancient method of producing separate overtones in the esophagus so that the singers could literally produce two or more separate and distinct notes simultaneously (one, in the lower register, sounds like the Aboriginal digeridoo, while the others manifested as high, keening wails). The effect was galvanizing to Peña, who quickly sought out any and all recorded examples of the art form, and he began to practice the skill on his own. In 1993, Peña learned that as part of a Russian-American cultural exchange program (arranged by Feynman's interest in Tuva), a troupe of Tuvan singers would be performing in San Francisco. Upon meeting with them, Peña's abilities so impressed the group's leader, Kongar-ol Ondar (described in the film as the Elvis of Tuvan throatsinging), that Peña was invited to compete in a Tuvan contest, something unheard of until then. Genghis Blues follows Peña to windswept, stoic Tuva and chronicles these absolutely remarkable men and the very strange music that has brought them together. Above it all hangs the ghost of the adventurer/physicist/bon vivant Feynman, a longtime fan of both Tuva and throatsinging, who sadly passed away before he was able to journey there himself. Along with a coterie of equally oddball characters, Peña and the Belics (whose unobtrusive documentary style is perfectly suited to their subject) encounter one difficulty after another before finally reaching their goal. As trite as it may sound, Genghis Blues has more relevant things to say about the human condition than almost any film I've seen in the past year -- it's literally heartwarming in its capacity to showcase everything from Peña's understandable uncertainty about traveling (being a blind man with health problems) to one of the most remote regions on earth, to the astounding sonic configurations that make up the Tuvan style of singing. I've quite honestly never seen anything like this wholly original film, and I'll wager neither has anyone else. Highly recommended.