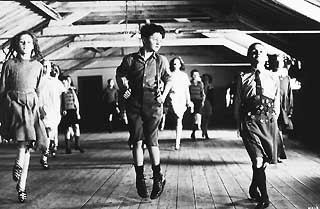 The wonder of Frank McCourt's astonishing memoir, Angela's Ashes, is that its story is told at all. An unforgettable account of growing up impoverished in the damp hell of Limerick, Ireland, in the 1930s and 1940s, McCourt's tale of his “miserable, Irish Catholic childhood,” as he puts it, is so harrowingly Dickensian at times that you have difficulty fathoming that it could take place in this century. It's a tribute to McCourt's temperament that he relates his story with a melancholy, self-effacing humor; a lesser man and writer would have taken the opportunity to avenge his childhood demons. (A Mam Dearest, perhaps?) Given McCourt's literary achievement, the cinematic adaptation of Angela's Ashes must fight an uphill battle. While narratively faithful to a fault, it's lacking in the pathos that gave the book its powerful form. There's an odd distance between the film and its audience in the sequences in which the McCourt family endures one tragedy after another, particularly the successive deaths of three children. You feel some empathy for the characters' pain, but your heart isn't heavy with the sadness that marked the early pages of the memoir. The casting of the integral role of Angela, the mother for whom McCourt has bittersweet memories, is in part responsible for this lack of emotional connection. Watson is a fine actress, especially in outré roles with physical demands, but she hasn't the center of gravity required to play Angela. Simply put, her presence doesn't permeate every frame of the film, as it should. (One of the book's most powerful, recurrent images is of Angela smoking a cigarette and staring at the cold embers in the fireplace, as her children lie hungry in bed. Nothing in the film comes close to this portraiture of despair.) As the weak but well-meaning father who can't measure up to his paternal responsibilities, Carlyle more fully realizes McCourt's vision -- the shamed, defeated expression on his face as he abandons his family for the last time is utterly heartbreaking. Parker (Evita, The Commitments, Midnight Express) isn't the ideal director for a film like Angela's Ashes, given his propensity to prettify his films; he's a filmmaker who abhors a mess. The soggy and dank slums of Limerick look like something out of a postcard most of the time. (In contrast, British filmmaker Terence Davies might have worked wonders with this subject matter.) Angela's Ashes is best when it irreverently recounts the twisted logic of Catholic dogma, as viewed from the eyes of a young boy. The rites of First Holy Communion and First Confession, formative experiences for every Catholic youngster of the time, are comically depicted as impenetrable mysteries. A tyrannical schoolmaster admonishes a class of boys laughing at a shoeless Frankie by pointing to a barefoot Jesus Christ on the crucifix; the same class practices for the Eucharist by taking the body and blood of Christ in the form of bits of torn paper placed on the tongue. In these scenes, the film comes as alive on the screen as the story did on the written page. All in all, for those who adore McCourt's work, Angela's Ashes will most likely disappoint; for those unfamiliar with this inspiring chronicle of a survivor, it will neither impress nor dishearten to any degree. Here, the adage that great books do not often great films make is regretfully true. As McCourt might succinctly say, “'Tis.” 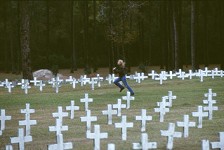