Jane Austen's third novel is given an odd treatment as writer-director Patricia Rozema infuses the story with liberal doses of modern attitudes and autobiographical tidbits from the author's life. In this story we have another of Austen's levelheaded heroines, Fanny Price (O'Connor), who navigates her way through a web of social and marital dilemmas. Instead of sticking faithfully to the 1814 novel, Canadian director Rozema (who was commissioned for this project by Miramax Films) incorporates fragments from Austen's correspondence and life into the dialogue, creating a sense and sensibility that often seems too modern for the times in which the story is set. Notions of marrying for love or money, the graphic evils of the slave trade, and the idea of women as professional writers run rampant through the story and seem at odds with Austen's original intents. I am not familiar with the novel, so cannot speak to the specific ways Rozema has altered the text, although the seams are quite frequently visible. As Fanny, O'Connor (Love and Other Catastrophes) projects beauty and intelligence, and her supporting cast (including playwright Harold Pinter) are equally engaging. Mansfield Park, however, is a confusing jumble of historical drama and modern social essay that only serves to cloud the whole field of Jane Austen studies. Ultimately, it may lead to a whole new flood of Austen film remakes. 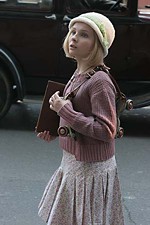 Kit Kittredge: An American Girl
It seems rather churlish to complain about entertainment aimed at little girls, who almost never get big-budget movies made just for them, nevertheless … this movie substitutes pluck and spunk for drama and sparkle.