The perfect companion film to last summer's uproarious documentary Trekkies, this sophomore effort by Parisot (Home Fries) parodies not only Gene Roddenberry's beloved television empire, but also the series' rabid fan base -- and then tosses in a heaping helping of bug-eyed monsters, lithe alien babes, and more tongue-in-cheek homages than you can shake a facehugger at. Not surprisingly, it's a one-note gag, but a superior gag performed with a minimum of cheese and a surplus of laugh-out-loud moments. The premise is sweet: The stars of the cult TV show Galaxy Quest, which was canceled in 1981, have in the interim been reduced to hosting duties at electronics store openings, stray public appearances, and suspiciously Trek-oid conventions. Their stars have clearly faded, but the hunger for their dwindling celebrity rages on, as evidenced by the Shatneresque Jason Nesmith (Allen), the actor who played the hunky, libido-fueled Captain Peter Taggart of the NSEA Protector. Hogging the limelight at every opportunity, he regularly steals the (admittedly tawdry) “show” from his former co-stars -- Gwen DeMarco (Weaver), Fred Kwan (Shalhoub), Tommy Webber (Mitchell), and Alexander Dane (Rickman) -- who, after 19 years, are ready to throw it all in. Reality and its bastard offspring, television and film, take sucker punches, though, when the arrogant (and hungover) Nesmith finds himself shanghaied by the Thermians, a benign race of extraterrestrials (they seem to have arrived from the quadrant “Latka” in the system “Kaufman”) who've patterned their society on what they believe to be the “historic records” of Captain Taggart and his brave NSEA Protector crewmembers. Before you can say “career opportunity,” Nesmith and his co-stars have donned their Lycra jumpsuits one more time to help the Thermians battle against a race of reptilian baddies led by the A Bug's Life reject Sarris (Sachs), who nicely manages to bring back memories of J.T. Kirk's old nemesis, the Gorn. Parisot and his cast play things straight, which, frankly, makes the movie. As DeMarco, Weaver is saddled with a poofed-out blonde 'do and exorbitant décolletage (which she manages to incrementally reveal as the film moves forward). Shalhoub's Kwan is clearly bewildered by it all but enjoying every minute of his newfound intergalactic celebrity. Rickman's Dane -- a failed Shakespearean actor -- grows into his role, and Allen's Nesmith redeems himself not only in the eyes of his crew/co-stars but also manages to (no surprise here) save the galaxy. Yet again. In addition to its genial riff on the Star Trek phenomenon, Galaxy Quest showcases a fistful of superior animation courtesy of Stan Winston and Industrial Light & Magic. Whether or not you're a diehard fan of the old Galaxy Quest, uh, I mean Star Trek shows, Parisot's film is frequently riotously funny stuff, playful, silly, and fun. And all without Styrofoam boulders, to boot. 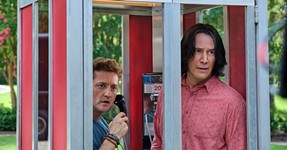 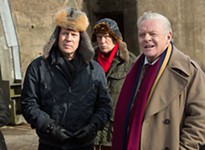