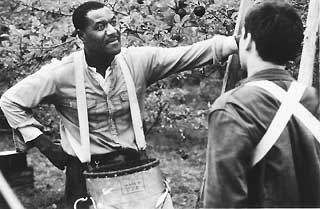 Novelist John Irving wrote the screenplay for The Cider House Rules based on his own novel, and the film certainly shows signs of the novelist's recurrent narrative gambit of young individuals trying to discover their place in the world and moral codes by which to live. Beyond this, however, it is difficult to say precisely what this movie is about. It's not that the movie is muddled or uninteresting. It simply lacks a clear dramatic through line that might guide our focus. No doubt this is primarily the result of paring down the bestselling novel's epic scope to a manageable movie length. Yet the movie can't shake the vague pall that keeps it amiably interesting yet never compelling. Tobey Maguire whose implacable demeanor was used so well in The Ice Storm and Pleasantville, here finds that same calm stolidity impeding our total absorption in the movie. He plays the twice-abandoned orphan Homer Wells, who, in the 1930s, is finally adopted by the orphanage in which he was born. He becomes the special charge of Dr. Wilbur Larch (Caine), the physician who runs the orphanage and also performs safe abortions for women who come to him not wishing to carry their pregnancies to term. Homer has been trained to perform all the medical procedures by his mentor, although the young man expresses his moral reluctance to perform abortions. Although he seems happy with life at the orphanage, Homer departs one day with a couple who has come in for an abortion. The young man Wally (Rudd) is a soldier who returns to the war; the woman is the scrumptious Candy (Theron). Homer is looking for new experiences and horizons, but his journey takes him only to another part of the state of Maine, where he takes work in the orchard of Wally's family and lobstering with Candy's dad. Of course when Wally returns to the war, Homer and Candy burn their home fires with each other, and Homer also penetrates some of the mysteries of the itinerant Rose family. The problem with The Cider House Rules is not the episodic nature of the story, it is the inconclusiveness of all its threads. The subject is such a hot-button issue that it is impossible in this day and age for it to be merely the background of a story and not the forefront. And the characters surrounding Homer all spark in us greater interest in their lives than does the affectless Homer himself. Caine turns in a memorable performance as the doctor who tries to teach Homer how to make his mark in the world and Erykah Badu projects a strong presence in her screen debut. Oddly, most of the elements needed for a good movie are present here, but when added together they equal less than the sum of the parts.