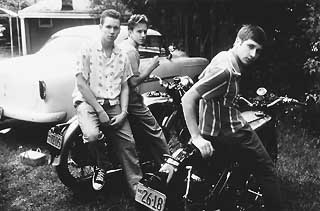 Levinson returns for a fourth time to his beloved 1950s Baltimore, the setting of Diner, Avalon, and Tin Men, this time minus much of the rose-tinted nostalgia his films have occasionally engendered. There is a nostalgic tone to the film, but it's a quiet, subtle one, more evident in Levinson's images of the magical allure of a brand new Cadillac or the bittersweet, tentative advances a young man makes toward the opposite sex than in any of the Fifties retro-revisionism that seems to cloud so much of our national memory. Like the rest of the country, Baltimore in 1954 was, of course, a city divided into clear-cut camps: the Jews, the WASPs, and the Negroes, or, as the mother (Neuwirth) of 16-year-old Ben Kurtzman (Foster) tactfully puts it, “the other kind.” As Levinson's stand-in, young Ben recalls growing up thinking that the whole world was Jewish -- he's been so isolated amongst his family and the Jewish community that the dawning realization that “99% of the world isn't Jewish” but is instead the dreaded “other” kind comes as a bit of a shock. Levinson's film is full of little awakenings like this. As a meditation on race, class, and religion, everybody involved gets a short, sharp slap on the face; the film has more red cheeks than a Shriner at Plato's Retreat. While Ben goes through a series of epiphanies encompassing everything from his attraction to the new token black girl at his school (an incandescent, willowy Johnson) to his friends' battles with anti-Semitism, his brother Van (Brody) is busy trying to work his way into the upper echelons of Baltimore WASP society. He's less interested in breaking the religion line than he is about bedding the chilly WASP princess Dubbie (Murphy), a girl so blond and statuesque she's like an icicle with cleavage. Can you see the conflicts coming? It's hard not to -- everybody here seems to be on a parallel track to trouble, though Levinson is such a skillful director and so clearly loves his material that even the obvious setups for the third-act smash-ups are less gratingly apparent than logical. When Jews, blacks, and WASPs are thrown together in 1954 Baltimore, well, something's got to give. As Ben and Van's father Nate, Mantegna gives a loosely charged performance. Head of the household, Nate's too concerned with keeping his floundering vaudeville parlor going (and keeping his numbers racket going on the side) to notice the whirlwind of change that is battering his boys. It's a standout performance, and when this Rosh Hashanah-observing, Caddy-loving mensch's house of cards finally, woefully begins to list, it's all you can do not to mourn the death of the real Fifties, a time when all bets were off, and a time that Levinson brilliantly, effortlessly, evokes.