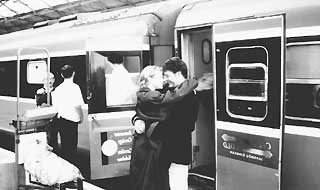 Some Fish Can Fly

Love and indie filmmaking go intrinsically hand in hand: One is necessary for the success of the other, and both are chock-full of pitfalls most sane people would prefer to do without. Pappas' takes on both conceits in this energetic yet curiously uninvolving film manages to span the course of a 10-year-long on-again/off-again romance and the havoc it wreaks on a pair of intercontinental lives. Kevin (Causey) is a NYC-based writer drifting through his life with nary a solid emotion to cling to. At the behest of his friend Z (Nagel), he attends a friend's party in the company of a young lady visiting from Cork City, Ireland. The girl, Nora (St. Alban), at first strikes Kevin as a bit of a bother; little happens during the course of the fête, though by the time the guests are filing out, both Kevin and Nora are retiring to engage in a (literally) seven-hour clinch. “I'd never kissed anything for seven hours,” Kevin gravely narrates, and though, for now, that's about the sum of the fledgling romance, Pappas and company have set the scene for one of the most rocky and realistically asinine relationships ever seen outside of freshman year. As Nora jets back to Ireland, and then back to America to visit Kevin, an engagement somehow occurs, vows are struck, and old flames unwisely spring to ignition. To top it off, in the midst of this (seemingly) endless relationship, Kevin takes it upon himself (and upon his friends) to make a film about the situation, employing actual dialogue from his relationship while wrestling with the near-impossibilities of raising cash flow. Pappas' wry commentary on modern love has a razor-sharp edge running through its core; despite all the lengthy cuddles and dew-drop eye-rolling, his characters (particularly Kevin) behave as though they've never entered into a mutually caring relationship in their shallow little lives. Of course, for Nora's part, that's true: Cast as a pure Irish virgin, you're not sure if this bit of libidinous arcana was tossed into the script to spice it up or perhaps as a bit of comic relief. That she'd ever take up with such a self-centered, apprehensive louse as Kevin boggles the mind. For his part, Causey plays Kev as a wild-card schmuck, quick to fire off acidic salvos to his transcontinental love when he feels the pangs of jealousy, even quicker to jet off to the Emerald Isle when he sees the folly of his ways. Where are the people from? And why is Pappas inflicting them on us? Despite the confusing tangle of lovestruck morés on display, or perhaps because of it, Causey and St. Alban are a pair to watch (if only in this film). Certainly St. Alban, with her radiant smile and enormous Irish eyes, is a pleasure to behold. It's just too bad Pappas' film comes in the bargain as well.