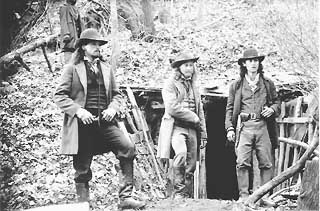 Ride With the Devil

Clarity of vision degrades over distance, and so do the high-toned rationales political leaders concoct to justify blood-borne passions. Ride With the Devil, in a surprising departure from previous Civil War films, spares us the epic schmaltz and mush-brained romanticism we've come to expect from the genre. Instead, it focuses on the savage, chaotic echo-wars waged far from the battlefields immortalized in coffeetable history texts and miniseries. The setting is the then-remote frontier territories of Kansas and Missouri. There, crisply uniformed armies and meticulous battle plans gave way to barbarous guerrilla skirmishes between regiments (gangs really) of cutthroats whose motives often had more to do with personal vendettas or sheer love of killing and plunder than with any clear-cut ideologies. Director Lee (Eat Drink Man Woman, The Ice Storm) works from the Daniel Woodrell novel, Woe to Live On, and is obviously sympathetic to the author's stated desire to suggest parallels between the anarchic irrationality of these conflicts and the current ethnic wars in Eastern Europe. There's no rhyme or reason to the motivations of many who cast their lots with the pro-Union jayhawkers and Confederate-sympathizing bushwhackers. Jake Roedel (the choirboyish Maguire, who was so memorable in The Ice Storm), a German immigrant's son, breaks with his countrymen to join the bushwhackers simply because that's where most of his childhood pals are. Freed slave Daniel Holt (Wright) also throws in with the Rebs out of loyalty to friend and benefactor George Clyde (Baker-Denny). Factions within factions: “Foreigners” such as Roedel find their loyalty questioned by the likes of racist, xenophobic psycho Pitt Mackeson (Rhys-Meyers), for whom no display of loyalty is enough to overcome the taint of otherness. There's an odd blend of stylization and extreme realism to this film. The dialogue is stilted, full of archaic $20-words and dime-novel flamboyance -- all the more jarring when delivered by these teenaged bumpkin characters. Some characters' motivations seem obscure and arbitrary, and the emotional impact of several pivotal scenes is oddly underplayed. At the same time, though, there's a brutal authenticity to the battle scenes, and a well-evoked sense of the nihilism and moral confusion bred by this pointless, endlessly protracted slaughter. If you look closely there is a classical three-act structure here, but it's well-concealed by Lee's conscious decision to soft-pedal key moments, particularly those involving young Jake's loss of innocence. Often, this non-Hollywood approach meshes with the actors' disarmingly artless performances (pop singer Jewel is an unexpected standout) to deliver a satisfying feel of authenticity. At other times, the absence of bombastic “payoff” scenes combines with the film's 138-minute length to create a sense of sprawl and emotional flatness. One longs for the next appearance by Rhys-Meyers, whose odd mixture of bloodlust and borderline foppishness provides some welcome eccentric coloring among all the umber-hued earnestness. By the end -- one of the few baldly sentimental scenes in the film -- it's clear that what we've just seen isn't a timeless masterpiece, or even top-10 fare in this unusually strong movie year. But on its own terms, Ride With the Devil's unostentatious originality, psychological insight, and stark beauty make it well worth any film lover's time, particularly for those who are fans of Lee's subtle yet deeply affecting cinema.