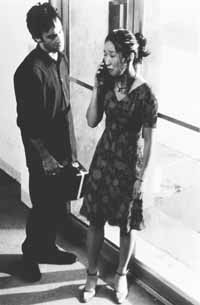 The apocalypse is oddly anticlimactic in Last Night -- it's not the end of the world as we know it. The Biblical prophecies in the Book of Revelation are unfulfilled; anarchy in the streets is almost civilized. For those living their last six hours on earth, there is an eerily resigned acceptance that doomsday is near, an acceptance that manifests itself in different ways. A dysfunctional family pretends it's Christmas; an amateur pianist realizes his dream of a concert recital; an avidly straight man contemplates sexual experimentation with another man; and a gas company employee calls customers to thank them for their patronage. A humanistic piece of science fiction, Last Night has a Ray Bradbury-like quality to it as it counts down earth's remaining hours. (The film never explicitly explains how everyone knows that Judgment Day will occur precisely at midnight, but its broad-daylight setting offers a clue.) At first, its characters seem a little opaque, but you soon realize that their behavior is entirely understandable. After all, what would you do if you knew that everyone on the planet would cease to exist at an appointed hour? Unlike the end-of-the world flicks that frightened a generation of baby boomers who grew up during the Cold War, Last Night is not a cautionary tale. There's no bogeyman, there's no lesson to be learned. Director-screenwriter McKellar has seized upon an intriguing idea and made an intriguing movie, one that doesn't haunt you as much as it lingers in your mind. (Casting himself in the film, however, wasn't such an intriguing idea. His stilted mannerisms may remind you of Rob Morrow.) And credit also should be given to McKellar for not sentimentalizing Last Night in the manner that other filmmakers have done when dealing with similar subject matter, Stanley Kramer's On the Beach coming to mind. (No strains of “Waltzing Matilda” here; rather, a radio station's reprise of the Top 100 pop songs wittily informs the movie.) While not a great film by any means, Last Night is a memorable one that is appropriate for the end of the millennium … whenever that's supposed to be. In contemplating whether the world will end with a bang or a whimper, it reveals a little something of the human condition as we enter a new age. The Grand Seduction
In this Canadian comedy, a down-on-its-luck fishing village spruces up to try to lure a big-city doctor to town.