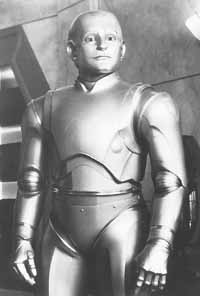 Is it me or was Robin Williams far less irritating during his years as a self-centered substance-abuse casualty? Granted, his manic, cocaine-induced performances on Mork and Mindy and the old Richard Pryor Show were wildly scattershot affairs; when Williams was on, he was full on, though much of his material seemed dredged up from the id for little more than his own personal edification. Since 1987's Good Morning, Vietnam, however, Williams' career has made an almost uninterrupted beeline toward what can only be called the emotionally treaclyzed: all warm homilies and urgent family values shot through with enough tearjearking direction to harden the softest heart. Such films as Hook, Toys, and the insufferably cheery Patch Adams have created Williams' own niche market, the “feel-overly-earnest” movie. Never has there been such a gifted actor so desperately in need of role as a serial killer. That said, the trailers for Bicentennial Man did little to alleviate my dread. Culling together the “funny” moments from Chris Columbus' (Mrs. Doubtfire) film, they make Bicentennial Man appear as though it were some offshoot of Woody Allen's Sleeper, all zany sight gags and futuristic Harpo Marxisms. Ignore the misdirection, though. Columbus' new film, based on Isaac Asimov's novella The Positronic Man with a script by Nick Kazan, mostly forsakes the comic underpinnings of Williams' recent career in favor of existentialism and Deep Questions regarding the nature of man, machine, and where the two might merge. Williams plays Andrew, a household servant-cum-android who, in 2005, arrives into the wealthy household of Sir (Neill), his wife Ma'am (Crewson), and their two young daughters, Miss (Letherman) and Little Miss (Eisenberg, late of IFC and Pepsi commercials). Sir is taken aback one day when he discovers that Andrew, who is ostensibly a glorified appliance, has a penchant for creating breathtaking wooden miniatures (not to mention his innate -- and non-programmed -- love of the family). After a quick trip to the manufacturer, Sir decides instead to “teach” Andrew all he knows with the hope of turning this “wonderful anomaly” into a better robot. From here, Columbus traces the “life” of Andrew and his dealings with the family over two centuries. As his loved ones fall prey to such human weaknesses as illness and death, Andrew hooks up with renegade robotics genius Rupert Burns (Platt), who enlists him in his goal to blur the lines between man and machine. Bicentennial Man touches on more “profound” issues than anything Williams has done since 1993's little-seen Being Human. It's hardly a comedy, and though there are moments clearly preordained to let loose the tear ducts, it's hardly the manipulative roller coaster it could have been. Neill, Williams, and in particular Davidtz show admirable restraint in the comic pratfall department, and though it's still a far cry from Asimov's brilliant novella, the original author's basic notion of man and machine bleeding into each other remains nicely intact. Parents in search of the next Williams holiday hootenanny will apparently have to wait until next year for sheer pratfalls; Bicentennial Man is more a meditation on the nature of life itself than anything else, and a welcome respite from Robin Williams, the emotion sponge.