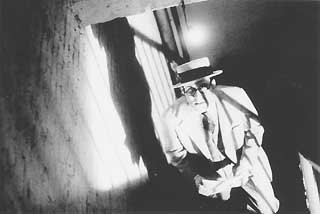 Man of the Century

Johnny Twennies (Frazier) is a man out of time. As his name implies, he's an artifact from another decade -- one that roared and had flappers and speakeasies and people who talked a hip, hard-boiled language and had a quaint code of conduct. He's a newspaperman in the Ben Hecht mode, a fast-talking, rat-a-tat columnist whose “What's the Scoop?” column in The New York Sun-Telegram reflects his sunny optimism about such events as ribbon-cuttings and other civic affairs. The only problem is that he's living a His Girl Friday existence in a Who's the Boss? kind of world. Johnny is totally oblivious to the fact that he's living in contemporary times -- a Twenties man in a Nineties world. The seamlessness with which the filmmakers (director Abraham and star Frazier mutually co-wrote and co-produced the project) pull off this illusion is the source of Man of the Century's inimitable charm. When Johnny wants to ask his girl Samantha (Egan) for a date, he sends her a telegram; when he sees a damsel in distress he rushes to rescue her from the street toughs; when he sits in the newsroom he pounds his old manual typewriter and smokes despite the “no smoking” rules. Yet when he visits Samantha in her SoHo art gallery, the modern art fazes him not a bit; at a nightclub he has to leap to the dance floor to “fidget the digit”; when his photographer Timmy (Rapp) explains his homosexuality, Johnny just stares into space uncomprehendingly. A popular hit at 1999's Sundance and SXSW Film Festivals, the black-and-white film is impeccably crafted. Frazier's performance as the throwback newsman is note-perfect and is essential to the creation of the film's graceful trompe l'oeil. Man of the Century is an original work, not likely to be repeated nor leaving much room for improvement (although an ongoing serialization of Johnny's adventures sounds dandy to me). Although the movie is short on plot, it's long on concept and well-executed. Besides, a man like Johnny, who knows who he is, is a man for all seasons. And that's no jive.