1900 is the name of a character, not a century, in this lush drama by Italian director Guiseppe Tornatore (Cinema Paradiso), his first filmed in English. Yet however stunning his movie is to look at, the enterprise is constantly undermined by its heavy-handed dramaturgy. Of course, a character named 1900 in this pre-millennial year of 1999 has intrinsic “meaning,” but what that might be is apparently lost on the filmmakers. The story is based on a dramatic monologue by Italian novelist Alessandro Baricco and tells the life story of a baby who was born at sea, abandoned by his parents, found and raised by the ship's workers, and grew to manhood having never set foot on dry land. The foundling is given the name 1900, and he develops into an instinctual and virtuoso pianist. “Why don't you just get off?” asks one of the passengers of his curious inability to disembark, and I have to admit to the same bafflement -- not only in the physical sense of the character's motivation but in the overall sense of the film's dynamic. The movie itself just never gets off. Tornatore's original cut ran in the realm of three hours, and many feel that this two-hour edit is a rude bastardization. Me, I was wanting to claw out single frames from the screen with my bare hands. Scenes go on forever without adding new information or tonal amplification. Tim Roth, who in other films is always so taut and twitchy, here has long stretches in which he merely looks doleful and burdened. (After all, he carries the weight of a century on his shoulders.) Max (Vince), as 1900's Boswellian biographer, fares even worse in the story's poorly designed wraparound sequences, and gives a performance that seemingly borrows from the early Tom Arnold school of acting. Despite these narrative disturbances, The Legend of 1900 remains a sumptuous ride with breathtaking scenes and a soaring musical score by Ennio Morricone. The film's most memorable sequence is the one in which 1900 and Max meet: Max's initial seasickness is quelled when he is taken for a physics-defying spin around the ballroom on 1900's piano bench. It's amazing to watch, but adds up to zilch. Although I have my suspicions, it's impossible to tell from this viewing whether the two-hour version is a blessing or a butchery. However, I'm going to label this one: “Shoot the Piano Player -- I Want to Get Off.” 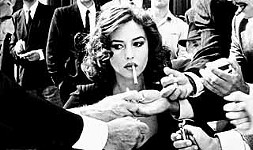 Malèna
A nostalgia for things past, a kind of dusty sentiment, envelops the films of Italian director Giuseppe Tornatore. Best known stateside for 1989's Cinema Paradiso, ...