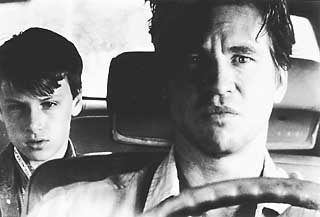 Contrary to Mel Brooks' dictum, it's not always so good to be the king. Whaley's directorial debut may be the feel-bad movie of the year, a take-no-prisoners journey back to the bad old daze of mid-Seventies upstate New York, where 14-year-old Joe Henry (Fleiss) sad-sacks his way through a daily grind that includes the occasional noncommittal beating from his drunken dad and constant taunting from his peers at school. Between bouts of petty thievery and hiding out under the porch of his family's white-trash household, Joe struggles to find a place for himself in a fist-filled world too obviously unconcerned with the trials of one little kid. His only real friendship lies with his older brother Mike (Ligosh), who tentatively tries to keep an eye on his wayward sibling while keeping his own nose clean. Lording it over all like some vengeful god of Pabst Blue Ribbon is the boy's father Bob (Kilmer, resolutely unsexy in filthy chinos and a sudden spare tire encircling his gut), who holds down a job as the janitor at the boy's middle school (an endless source of shame, apparently, to all concerned). Then there's mom (Young), a woman so beaten down by a life of unfulfilled promises and busted hedgerows that her only solace comes from the countless Johnny Ray LPs she pipes through the household. When, in a drunken rage, Bob smashes them all, Joe finds himself burglarizing his local greasy spoon in an attempt to raise cash to salve his mother's wounds, which, predictably, makes things worse. Joe may be the king, but his kingdom has gone as septic as the untreated gash in his calf. Despite the relentless downbeat thrum of Whaley's film (he also wrote the script), Joe the King is a powerful little gem: a little bit of The Outsiders (the film's tone is remarkably similar to Coppola's film, minus the airy redemption and golden sunrises), a lot of The 400 Blows, and a slice of Radio Flyer all wrapped up in a dirty black bow. Whaley, best known for his powerful character roles in such films as A Midnight Clear, proves to be as tough behind the lens as in front of it. Joe the King is crowded with brilliant, half-glimpsed moments of tragic poetry, sorrowful though it may be. A scene at the local roller rink, during which Joe is asked to dance by the local fast girl and then proceeds to improv some spastic gyrations resembling nothing so much as a teenage Elvis Costello on a bad java high, is achingly pathetic. And when Joe's dad sits him down to offer a little advice on life and the future, it's like watching a ghost attempting to console a drowning man: Futility Inc. Whaley's film isn't for everyone, obviously. The unending elegiac tone; the gray, grim cinematography that reduces even a young woman's smile to a sorry rictus; and the plight of everyone involved becomes wearing very quickly. It's painful, yes, but painfully honest as well, which is more than can be said for the majority of coming-of-age films these days.