There is a new definition of the term, “critic-proof movie,” and it goes by the name Pokémon: The First Movie. Depending on your perspective, the movie's subtitle can sound like either a sacred promise or a dreaded threat. Presumably, if you're going to this movie you're either an obsessive fan (probably ages 6-12, and in complete command of all 151 Pokémon characters and their unique attributes), a parent of said obsessive, or someone who wishes to become better-versed in Pokémania. Nothing said in a review will likely influence your choice in going to see this movie. Likewise, if you're already living your life virtually Pokémon-free, nothing in this review is likely to show you the error of your ways. Thus, we won't waste space here defining the phenomenon by which Pokémon characters have developed from a Japanese video game to trading cards, to an American TV series, and now, to a film franchise. (Rest assured, the folks who preside over all those cute characters at Disney can quote you chapter and verse in the tale of the explosive Pokémon invasion.) The animation in the film is flat and two-dimensional, not likely to bother kids whose standards of comparison are limited. The story certainly espouses the positive virtues many have hailed: Pokémon are cooperative, loyal creatures who merely whack each other unconscious rather than killing each other. (I wonder whether in another few years we'll see a breed of aging Pokémon, punch-drunk and goofy in the head like a bunch of old boxers.) You can read the whole movie as a Christian parable: One Pokémon even repeatedly turns the other cheek while being struck on the face, either a Christ-like action or a Mommie Dearest imitation. Yet, I hesitate going too far with the parallel because there's a dark side below the Pokémon surface that bespeaks their servitude to human masters and a certain gladiatorial fervor. There's also a fairly dark preamble to the movie that describes the cloning of Mewtwo and may be a little darker than what the kids have come to expect from the TV show. In fact, more reminiscent of the TV show is the 15-minute episode, “Pikachu's Vacation,” that precedes the 75-minute film. Here we find the virtually story-less wash of Pokémon characters and trippy visual interludes. I'm betting that a 75-minute version of this is what the kids really want to see -- but that's not going to prevent them from coming back for more. 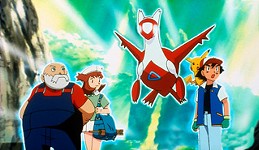 Pokémon Heroes
Does any kid worth his or her Gameboy Advance SP even care about the Pokémon series anymore? And if so, why? I’ve gone easy on ...