Commercially speaking, this ingratiating low-budget romantic comedy seems bound for one of two starkly opposed fates: Death on arrival or modest word-of-mouth success among fans who root for the underdog in all areas of life. (These willful contrarians are easily identified by their tendency to drink Mr. Pibb, use Atari computers, and communicate by CB radio.) Lacking any brand-name stars and based on an obscure self-published novel by Lynn Scott Thomas, its pedigree couldn't be more nondescript. Still, Ruzzin's film obviously had something going for it to merit national theatrical release. That something would appear to be its almost fascistically positive worldview, in which no misfortune or human conflict presents more than token resistance to the jackbooted rule of sweetness and light. Extra points were probably earned by its modish cooking-as-life-metaphor theme and cast full of young actors whose resemblance to more famous stars lends them instant appeal. Unfortunately, The Hungry Bachelors Club's prospects for repeating the success of analogous movies like Like Water for Chocolate and Soul Food are severely limited by screenwriter Fred Dresch's unfocused, hard-to-follow script. Even for those of us raised in the post-Altman era of mandatory multiple plotlines, there's way too much information to comfortably digest. Stressed-out single mom Delmar (E.R. semi-regular Fox) dreams of starting her own restaurant. Lacking the cash, she cuts a $50,000 surrogate motherhood deal with a rich lawyer who's also the boss of yuppie geek Stanley (Provenza), who's stringing along her best friend Hortense (Mara) with vague hints of marriage. The frustrated Hortense, meanwhile, is consoling herself in the arms of sexy deadbeat novelist Marlon (Shackelford), best bud of Delmar's New Agey auto mechanic bro Jethro (Murnik), who's befriended both worldly-wise, gourmet-cooking ex-convict Moses (Nunn), and reforming cokehead Missy (Kendall), who … well, you get the idea. The result of Dresch's efforts to resolve all these plot threads within what Ruzzin clearly views as a character-driven story is a disorienting narrative slalom course racing from one emotion-drenched, morally improving set-piece to another -- with no real sense of what actual events or thought processes are provoking these emotions. There's a similar odd tension among the writerly influences of Thomas and Dresch, resulting in a funky stylistic ragout of Joshua Brand (Northern Exposure), Amy Tan, and Callie Khouri. On the upside, The Hungry Bachelors Club boasts ensemble acting that rivals many of its obvious models. Fox, a pretty serviceable Geena Davis facsimile, does an impressive job of reconciling the tough, tender, humorous and sensual aspects of Delmar's character. The underused Nunn, convincingly aged 25 years beyond his role as Radio Raheem in Do the Right Thing, is equally good as her business partner/soulmate. Still, in the end, this is one of those too-common movies whose luster owes mainly to the reflected glory of its models. Eat, if you're so inclined, but don't be surprised if you're hungry again an hour later. 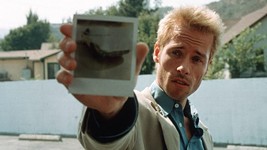 Memento
Christopher Nolan's breakthrough movie is a film noir thriller with a gimmick.