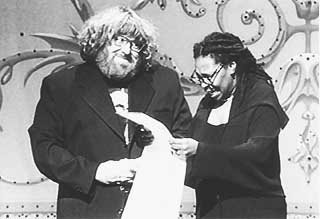 You may not know Bruce Vilanch, but you've heard him on TV. Remember Oscar host Billy Crystal's riotous medley of Best Picture nominees? Bruce Vilanch helped pen that. And the Friar's Roast appearance that blew up in Ted Danson's (black)face? Yep, that was Bruce, too. As the comic juggernaut behind innumerable television benefits, tributes, and award shows like the Oscars, Bruce Vilanch “has given more lines to celebrities than a Hollywood coke dealer” -- or so quipped actor Nathan Lane. In this joyous ode to laughter as a way of life, former film-trailer director Kuehn makes a long-overdue introduction to the writer every star just has to have -- a goofy, lovable, proudly gay man whose plump face and flopsy nest of red hair prompted Donny Osmond to comment that he “looked like a Muppet.” Hysterical chats with Vilanch's mom -- a Long Islander just as loud and fabulous as her son -- help connect the dots between the shy, pudgy teen at his bar mitzvah and the kibitzer who dared sass back to Barbra Streisand. Get Bruce! occasionally ponders the larger questions -- like what makes someone funny (which prompts Paul Reiser to note that if he could choose between making someone laugh or kicking their ass, he'd gladly take the latter). But more than that, Kuehn's documentary is an anatomy of a life in the wings of the theatre, with Vilanch expounding on why he chose to sacrifice the spotlight, the horror of writing jokes for Steven Seagal, and the moments he made magic with his biggest clients: Billy, Whoopi, Robin, and Bette. In fact, Kuehn packs enough A-list interviewees, stars behaving badly, and Hollywood dish to push E! Entertainment Television into a fashion emergency. The film takes a dangerous step into Crime Stoppers territory when it attempts to re-stage certain artistic collaborations, but for the most part, it's a snappy, 72-minute showcase of greatest comic hits. You may not know Bruce Vilanch, but after this film, you'll wish you did.