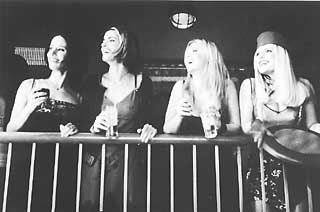 “Sex without love equals violence.” That's the bleak thesis lashing around at the bottom of this murky feature, an indictment of frat-boy hedonism in which beautiful twentysomethings use alcohol and casual sex to drown out the despair festering in their souls. Perhaps the best thing that can be said about Body Shots is that it's less wretched than it looks, but for a film that grandly boasts in its tagline, “There are movies that define every decade,” Body Shots isn't very savvy about this decade, capturing about as much zeitgeist as one of those socially conscious episodes of Beverly Hills 90210. Writer David McKenna (American History X) seems particularly obsessed with modern sexual frankness -- his characters gab about the perfect blowjob while remaining unable to express even their most basic feelings without marinating in a vat of vodka tonic. But for all this naughty blather, they're irresponsible and naive about their behavior. The most extreme example can be found in the film's central conflict, in which party-girl Sarah (American Pie's Reid) accuses football star Michael (O'Connell) of date rape. Is she exposing the beast within the sports stud? Or is she rationalizing her own inebriated lapse in judgment? It's never clear. The film deconstructs the night in question, following Sarah and Michael on an evening with a group of their friends, all searching for the perfect mate and the perfect high. Despite its moralistic intentions, Body Shots fails to hit its target, filled as it is with uniformly unremarkable performances and unlikable characters (but, curiously, no body shots). Even the actors' direct addresses to the camera, like desperate pleas to connect with the audience, come off as scripted and false. Director Cristofer (Gia), however, seems less interested in developing sympathetic portrayals than he is with the dazzling camera tricks he keeps yanking out of his hat. Despite comic characters like Trent (Livingston), who uses a plastic baggie and a twist tie in lieu of a condom, this is a bleak, depressing film, with neither the wicked snap of Neil LaBute (Your Friends & Neighbors) or the humane, self-deprecating wit of Jon Favreau's Swingers. Sadly, people like this probably do exist. But I wouldn't want to spend any time with them, and I imagine you won't either. 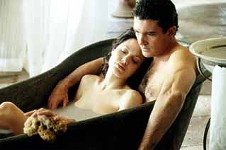 Original Sin
Although his name is somewhat less well-known than some of his more famous contemporaries, author Cornell Woolrich is regarded by many people as the father ...