In the mid-19th century while on a tour of Italian architecture, the famed French author Stendahl found himself so overwhelmed by the beauty of what he was seeing that he slipped into a mysterious fugue state from which it took him days to recover. That's the titular syndrome of Argento's recent (it was shot in 1996) film, though, as fans of the Italian horror director may have guessed, it's little more than a suitably arcane jumping-off point for another of the filmmaker's bizarre examinations of madness, obsession, and bloodshed. Argento's daughter, Asia, plays Roman detective Anna Manni, who, as the film opens, finds herself inexorably drawn to a painting in the Uffizi gallery in Florence. Swooning, she collapses to the floor and dreams of actually entering the oceanic painting to swim (and caress) the fish within. Awaking, she has no memory of the event, or indeed, any memory whatsoever. From here, the Argentos embark on a lengthy, debauched ride that includes a deranged serial rapist/killer (Kretschmann), mistaken identities, brooding psychoanalysts, and a cavalcade of artful cinematic violence not seen since Argento's 1987 masterpiece Opera. Like that film, The Stendahl Syndrome is at least a partial return to the director's beloved giallos -- literally, “yellow films,” rife with suspense and unknown assailants with dubious motives -- in that the supernatural aspects of the film are consigned to the background while the killers take to the fore. And while it's not Argento's best work, it is a nice return to form after 1993's plodding Trauma. Almost gone are the hysterical color schemes of which Argento has been so fond in the past; there was a time when Cinecitta Studios in Rome had trouble keeping up with the director's endless craving for the red and blue gels in which he used to bathe nearly every shot. Gone also are most vestiges of his longtime fascination with the occult. Instead, Argento focuses on -- no surprise here -- the ritualistic destruction of the human body's most tender, sacred parts. As in Opera, the puncturing of characters' eyes, Argento's favored poetic windows to the soul, makes an appearance, as does the desecration of faces and mouths (one spectacularly disturbing shot, rendered with the assistance of computer graphics, shows the course of a bullet as it tears through a hapless hooker's open, screaming mouth. Ouch), and especially, the mind. Stendahl's Syndrome is also rife with the director's trademark camera obscurities: swooping, airborne shots; the maniac's POV shots, and long, clinical glimpses of chilly stone architecture. The acting here is steadfastly mediocre, replete with the odd-syllabled English dubbing that makes a dreamlike film even more so, but, let's face it, no one goes to a Dario Argento film for the subpar thespians of European B-cinema. An auteur in the strictest sense of the word, he's almost Hitchcockian in the obsessive-compulsiveness of his rigorously stylized worldview. It's nasty, brutal stuff, but it's also unlike anything else out there. 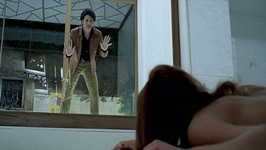 The Bird With the Crystal Plumage
...