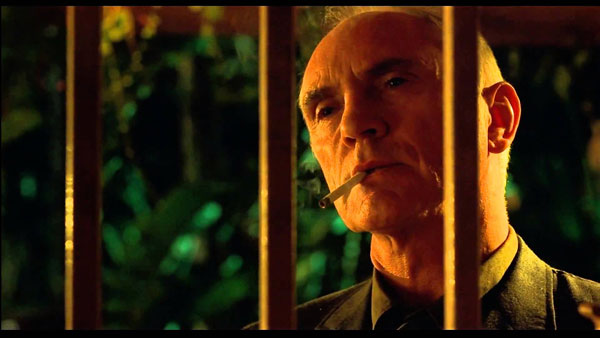 The film starts out in blackness as a Cockney-accented voice demands, “Tell me about Jenny.” With that, The Limey is off and running, looking not so much for the truth about Jenny as for a way out of the darkness. Steven Soderbergh is at the top of his game with this new movie, ably demonstrating that he is one of the most consistently rigorous and self-driven directors currently at work in the American cinema. Above all, Soderbergh is a master of narrative economy, stripping down images and information to their essential components, always searching for the most efficient and visually frugal means of telling his stories. The Limey continues in the vein he established with his previous film Out of Sight -- straightforward genre pieces that he treats as anything but straightforward. Soderbergh fractures the narrative in The Limey so that the story is told in a flurry of out-of-sequence cuts that nevertheless make logical and progressive sense. When broken down, The Limey's story (written by Lem Dobbs, who also wrote the screenplay for Soderbergh's Kafka) is a simple revenge tale that Soderbergh uses as the spine for his narrative reassemblage. Terence Stamp plays the title character, a British ex-con named Wilson, who has come to Los Angeles to pursue the man he believes to be responsible for the death of his estranged daughter Jenny. That man happens to be Terry Valentine (Fonda), a fabulously rich and unsettlingly creepy record producer. The solid spine of the revenge story allows the film to explore the inner realities of these two men, as well as a number of supporting characters. Casting Stamp and Fonda in the two central roles is a stroke of genius. Both are veterans of Sixties avant-garde cinema whose careers have had something of a comeback of late. These two actors share equal iconic weight. A sly film ploy also adds realism to Stamp's character by inserting clips from Poor Cow, a 1967 Ken Loach movie starring Stamp that is used to reflect Wilson's flashbacks to his earlier days. These memorable performances by Stamp and Fonda are anchored by the marvelous performances by all the key supporting players: Guzman as the friend of Jenny's who contacted Wilson; Warren as the dead girl's best friend; Newman as Valentine's advisor and “security” expert; Heinle as Valentine's beautiful young girlfriend; Katt as a wiseass hitman; and Dellesandro as Katt's partner in crime and pool. Somewhat problematic is the conclusion of The Limey, as it presents a not-quite-motivated action (or, more properly, inaction), but this is a minor problem in a film that provides so many other conceptual thrills. Now, more than ever, Soderbergh has shown that he is a filmmaker capable of engaging both the mind and the senses. The Limey is the work of a fine craftsman and artist.