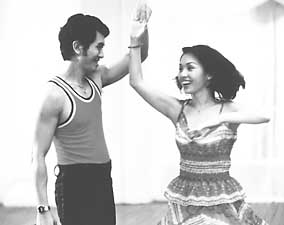 Disco dead? Perish the thought. At least not in Singapore, circa 1977, an Americanized era of pleated bell-bottoms, white polyester sport coats, and the wandering spirit of youthful rebellion as filtered through the eyes of John Travolta and Bruce Lee. Goei's feature debut is a wistful, humorous, but ultimately fluffy look at those halcyon days, before punk, junk, and the onslaught of the Eighties. Talented newcomer (to our shores, anyway) Pang plays Ah Hock, a teenage misfit who spends his days stocking shelves at the local mini-mart and his nights laboriously practicing kung fu moves before his mirror while a poster of the late Bruce Lee looks down from above. Hock and his friends wander the streets and bowling alleys at night, searching for a way out of their Singaporean teenage wasteland, while at home, they battle insensitive parents (Hock's mother and father clearly favor his med school-bound younger brother) and futures that appear ripe with the promise of nothing. This all changes for the better -- or at least different -- when Hock and his friends inadvertently take in a screening of the film Forever Fever, a thinly veiled Saturday Night Fever knock-off. Enamored of the film's cool, stylized dance moves, Hock decides a way out of his dead-end life might just be via some fancy footwork and a new white suit. Toward that end, he enlists his childhood friend and sometimes gal-pal Mei (Tan) in his ambitious scheme, the end result of which, he hopes, will see him crowned as the winner in a local dance contest. Pang, Tan, and a host of Singaporean ensemble actors are all mildly endearing in their roles -- they manage to nail both the frustrations of coming of age in mid-Seventies Singapore as well as echo the day-to-day comedic shenanigans of young punks on hope. Goei, late of the British stage where he starred alongside Anthony Hopkins in M. Butterfly, keeps the film moving by alternating scenes of outright comedy -- Hock's initial dancing leaves much to be desired -- with hints of magical realism in which a familiar dance icon -- okay, Travolta's Tony Manero -- “visits” Hock to assist him in the ways of both love and dance. Shades of Play it Again, Sam, if you ask me, but it works as well here as it does in Herbert Ross' film adaptation of Woody Allen's play. For all its good, goofy intentions, though, That's the Way I Like It barely registers more than a few days after viewing, despite some interesting, non-comedic allusions to Singapore's transvestite scene and the shocking emotional meltdown of a minor character. An interesting look at a pop-cultural phenomenon little-known outside of its own territory, That's the Way I Like It nonetheless shows that teens are alike all over.