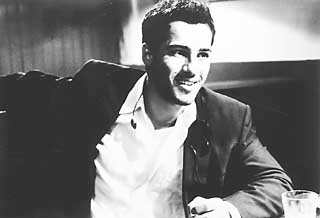 As the woefully conflicted young Greek-Australian Ari, the feral, dynamic Dimitriades is less a teenage house o' fire than a self-made neutron bomb: He may kill himself, but he'll leave everyone around him standing. Actually, Ari's outcome is never for a moment certain in this feature debut by Ana Kokkinos, who is also of Greco-Aussie descent. The director has adapted Christos Tsiolkas' monologue-laden novel Loaded for the screen and managed to make one of the most grungily powerful portraits of an imploding down-under youth culture since Geoff Wright's Romper Stomper. No skinheads here, though (they're presumably out bowling). Ari and his bourgeois hoodlum friends are the sons and daughters of Australia's Greek immigrant wave of the late Seventies. Unable to pass for anything other than “wogs” to their more follicly challenged neighbors (“They look at us and all they see is a hairy back,” opines Ari, speaking of the angly girls he covets), they're stuck in dead-end squalor, living at home with parents who caw and preach about the sanctity of marriage and normalcy, all the while forgetting their wild, protest roots as mid-Seventies Greek activists. No wonder the kids aren't all right. Ari, who is as handsome as a rock star after too many clusterfuck weekends, spends his time carousing with his mates, shooting, sniffing, smoking, and ingesting whatever appears in front of him at any given moment -- all while, you should pardon the expression, “dreaming of a better day.” It's hard to tell, really, what Ari is dreaming about, actually, since the 24-hour drug, drink, and illicit sex binge he's on over the course of Kokkinos' film renders him (and us) vaguely insensate. Suffice to say, he's not just coming of age but also, apparently, coming out, meeting lardish, older men in steaming, piss-stinking alleyways for quick, adrenal-enhancing handjobs and the like, while ever wondering what's next. What's next is Sean (Garner), a blond college boytoy with the hots for Ari, who maybe, just maybe, might be able to break him of his self-destructive smash-up. Or maybe not. Then there's Johnny, Ari's transvestite friend who takes his dead mother's name -- Toula -- when he dons her clothes before going out for a night of general harassment and off-handed horrors. Not a pretty picture, this. Head On deals with so many issues -- queer, straight, Greek, and Aussie -- that it's sometimes hard to get a handle on what's most emotionally eviscerating. Kokkinos, however, goes at it all with a relentless, take-no-prisoners panache and pace; this film moves. Director of photography Jaems Grant uses gobs of hand-held, close-up camerawork to draw you into even the seamiest aspects of Ari's vida loca, and Ollis Olsen's manic, propulsive, techno-laden score flails alongside the characters' tortured psyches in a ricocheting counterpoint. It's almost too much to bear, at times, but then that's Ari's wonderful, horrible life.