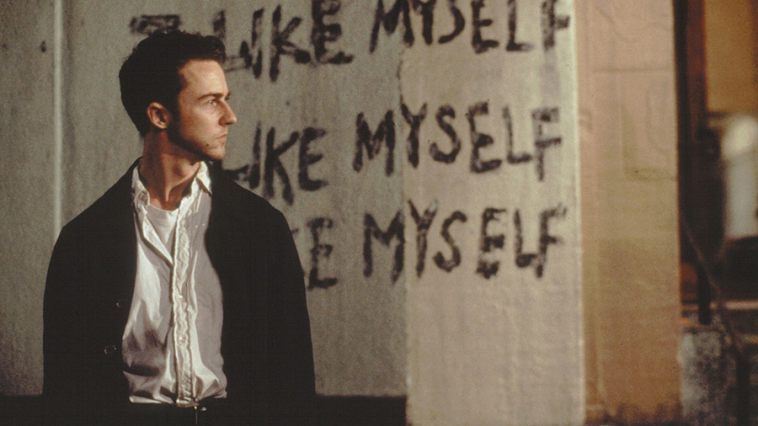 Ikea kills. That's the message of Fight Club, an incendiary, psychotic film surely guaranteed to polarize both critics and audiences alike, and one of the most interesting screeds in a long while. There's no middle ground with Fight Club -- you're either going to bask in its perverse sense of empowerment or write Congress demanding director Fincher be tarred and feathered with his own cutting-room sweepings. It's that grim, yes, but that's also missing the point -- for all its revolutionary, fuck-it-up fervor, Fight Club's dirty little secret is it's one of the best comedies of the decade. Forget the blood, the explosions, the Nietzchean verbal jousting, the weird gender mutation, and the Robert Bly, chest-thumping scrotal free-for-all -- this is some funny, subversive stuff. And I suspect that's what Fincher intended all along. The film opens with the unnamed narrator (Norton) struggling to speak around the oily blue gag of the gun jammed in his mouth. Phallic jokes aside, he begins to recount just how it was he ended up in this predicament, taking us back six months to his initial meeting with the world's oddest traveling salesman, Tyler Durden (Pitt), a dealer of pricey homemade soaps whom he meets on a plane. Beaten down and adrift in American consumer culture (though, it should be noted, Fincher never tells us what city we're in -- it looks suspiciously like Ridley Scott territory to me), the narrator spends his days at a job he despises and his nights ransacking the mail-order catalogs of Ikea, Sharper Image, and the like, desperate to give some meaning to his life. The chance arrives with a bang, literally, when his condo mysteriously explodes, temporarily leaving him without a home to call his own. Re-enter the grittily sexual, scarily stoic Tyler, who offers to put him up (if he'll just ask). Before you can say “roomies suck,” the narrator is ensconced in Tyler's ramshackle mansion, all leaking pipes, filthy corners, and stinking of ick. Fincher takes flight here, as the warrior and the wannabe create the Fight Club, an underground fisticuffs group designed to return men to a time when they were, apparently, animals. Spouting neo-fascist pabulum and hitting like he means it, Tyler watches the group's ranks swell, while other covert cells begin to dot the cultural landscape. Enter bottom-feeding Bonham Carter as a freakish love interest to the pair, toss in some homemade terrorist acts, and you've got a film as scarily intelligent as it is exasperating. Watching Fight Club leaves you with the feeling you've just read Mein Kampf as re-written by Jesse Ventura and Soupy Sales. There's not a shred of sanity in its soggy, gore-soaked 140 minutes (and at that it's 20 minutes too long), and yet you can almost empathize with the story's anarchic zeal. Is it sick and wrong? Or sick and right? I can imagine which side Bob Dole's going to go with, but from a purely filmic standpoint it's dead-on. Whether you're repulsed or invigorated by the film, Fincher, Pitt, Norton, and Bonham Carter are all at the top of a very nasty little game here. Do your laundry before you go -- you're going to want a fresh towel after this one. 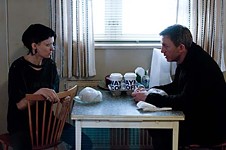