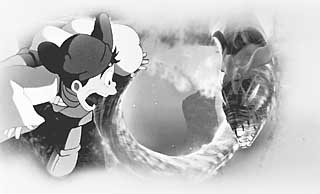 You'll probably never really understand what on earth (or elsewhere) is going on in this Tsui Hark-produced-and-written animated adaptation of his Eighties smash live-action film of the same name, but don't let that deter you from seeking it out on the grounds that it's just too strange. Utilizing conventional cel animation alongside computer graphics, this tale of a lovestruck young debt collector wandering around ancient China in search of his true love is an eyeful of candy-coated images. Unlike its Japanimation counterparts, there's nary a tentacle or scantily clad vixen in sight, which makes it suitable for younger viewers, though frankly, I wouldn't expect them to be able to unravel the bizarre plot lines either. Ning, the collector, and I'm guessing a bit here, spends his days dreaming of the lost love that he's only met twice, the gorgeous Lan. Taunted by her in his dreams, he travels from city to city picking up gold for his masters. Along the way, he falls for a ghost called Shine, who apparently can't decide between possessing him or falling in love herself. Add to this already eclectic mix a trio of “ghost busters” -- Red Beard, White Cloud, and Flying Dragon -- dead set on knocking Shine from this mortal plane, and you have a recipe for, well, confusion, actually. Still, UT alum Hark's adaptation of his original is hardly lacking in character. There's Ning's little dog Solid Gold, a clever blend of Tex Avery eye-popping shenanigans and Muttley splutter, weird floating eyeball clusters known as “Foul Smells,” and dragons, sorcerers, and just plain I'm-not-sure-whats all over the place. Hark has never been at a loss for wholly original ideas, and this, his first animated film, is nonpareil when it comes to utter lunacy. A riot of conflicting Day-Glo colors, oddly juxtaposed animation styles (unlike Disney's recent work in Tarzan, which also utilized both cel and CGI, Hark's animators make no pretense of blending the two styles together with any rhyme or reason), and preposterously over-the-top action scenes. Unlike the original, there's scant blood and gore on the screen, and most of the violence is cartoonish in such a way as to be patently inoffensive. Like all of Hark's work with his Hong Kong-based Film Workshop Inc., the animated A Chinese Ghost Story moves at roughly the speed of thought -- images and characters appear and then disappear before you can get a handle on who (or what) they are, none of which detracts from the sheer goofy splendor of this very wacky film. Don't bust a synapse straining to figure this one out, just sit back and enjoy the colorful, chaotic, utterly senseless fun while it's in front of you.