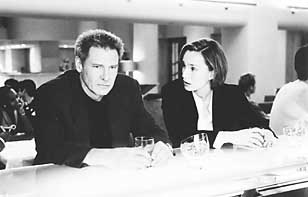 Something akin to viewing dead grass not growing, Random Hearts is that rarest of movies, a moribund Harrison Ford vehicle, stodgily dull, and seemingly endless in its monotony. Pollack (who also appears here in a minor role) has exhibited a sure hand in the hearts and minds-strewn genre of adult romances in the past -- witness Out of Africa, The Electric Horseman, and to a lesser degree, Tootsie -- but stumbles badly with this screen adaptation of Warren Adler's bestselling 1984 novel, relying on the emotional gravity of the film's core situation to envelop the audience in a cloak of adult emotions. It's played with a relentless gravity that threatens to suck your eyelids down, and generates little more than tiresome glances at one's wristwatch, the shuffling of feet, and frequent trips to the bathroom to ponder the far more entertaining stallside graffiti. Ford (in a scruffily oddball haircut that recalls his equally distressing 'do in Presumed Innocent) plays Washington, D.C., police sergeant “Dutch” Van Den Broeck, who uncovers his wife's infidelity when the commercial airliner she's on plummets into the Chesapeake Bay. As it happens, she appears to have been jetting off to a Miami Beach rendezvous with her lover (Coyote), the husband of New Hampshire congressional candidate Kay Chandler (Scott Thomas). Having until now believed himself to have aced the marriage game, Dutch is nonplused by this disturbing turn of events. “What happened?” becomes the central question in his life overnight, and in his obsessive search for answers, he literally drags Kay into the post-adulterous fray. A battlefield romance of sorts develops between the two, but it's abundantly clear that this relentless pursuit of the truth is Dutch's raison d'être alone. The ruggedly stoic Ford and a chilly, quiet Scott Thomas play their roles with numbed and numbing seriousness that is ponderous in the extreme. A pivotal scene in which Dutch confesses his belief that their respective mates were engaged in some illicit extramarital activities is so full of pregnant, subtextual pauses that it takes nearly 10 minutes for a handful of information to be dragged kicking and screaming to the fore, and as such, it plays like a parody of itself. It's all you can do not to giggle helplessly. An annoying subplot regarding one of Dutch's internal affairs investigations does nothing to strengthen the film. Clearly, Pollack and his cast are trying to present a sober-minded depiction of loss and grief as befits a mature pair of relationships. It doesn't work, though, and Random Hearts becomes, by dint of that very same self-absorption, a lachrymose and deadly dull depiction of how not to make an adult romance. 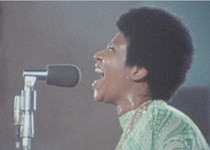 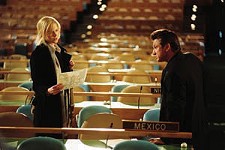