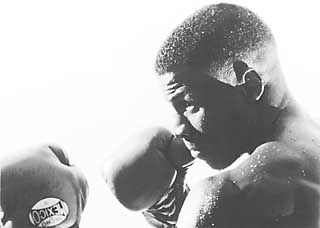 Boxing, that peculiar sport that engenders both brutality and balletic finesse in its athletes, has never particularly captured this critic's imagination apart from such related films as Raging Bull and When We Were Kings. Burstein and Morgen's bracing documentary, however, focuses less on the politics and arcana of the sport than it does on the lives of its subjects outside the four corners. Beefy Harry Keitt, to whom we are introduced early on, at first seems almost a cliché. An aging ex-boxer, he now spends his time teaching and acting as manager to a group of at-risk personalities who frequent the Bedford-Stuyvesant community gym where he works. As an ex-con (he shot his cousin over a drug deal gone awry years ago), he knows the Bed-Stuy projects as well as any of Spike Lee's characters, and like that director's onetime alter-ego Mookie, he just wants to do the right thing. For Harry, that entails training and grooming the upstart, fresh-faced boxer wannabes who come to him seeking not only his profound knowledge of the sport, but also his frequent, seemingly parental advice. Most of it is common sense -- stay in school, hang tough, winning isn't everything, et cetera -- but Harry, with his piercing, haunted gaze and solemn tones, is offering much more: a way out of an increasingly perilous 'hood. Similar to the much-revered Hoop Dreams, which focused on B-ball as a ghetto escape route, the co-directors of On the Ropes focus on a small clutch of boxers on their way up, or, at the very least, moving in some direction, via the ring. There's George Walton, a dead ringer for Tyson with a far less threatening chip on his shoulder. Clearly the film's best athlete, Walton is torn between his allegiance to Harry, who brought him to where he is now, and a squirrely promoter, Mickey Marcello, who is eager to take him to the professional tiers, via the Las Vegas proving grounds. Teenage Noel Santiago, who shares his two-room apartment with his reformed crack-addict mother, is another of Harry's charges and the film's most bewildering boxer. Unsure of his abilities, he frequently backs down or threatens to quit when he loses a fight, and it's all that Harry can do to even get him to show up on time. Then there's the documentary's most wrenching persona, Tyrene Walton, a twentysomething woman fiercely, achingly intent on making it to Madison Square Garden's Golden Gloves bout no matter how hard she has to push herself. In her eyes, she is her family's one shot at respectability, now that her household has been torn asunder by AIDS, drugs, and alcohol. A portrait in moxie and hardbody resilience, she nevertheless faces the possibility of the worst outcome of the lot. Without saying too much, it's her imperiled shot at the bout that anchors the film, both emotionally and physically. Burstein and Morgen keep the pace moving fluidly, like a boxer's stance in the ring. Shooting on video, they never intrude on the story as it unfolds, letting their subjects speak for themselves, sometimes with as little as a covert look at the camera. By the end, you haven't learned as much about the sport of boxing as you may have expected, but you've learned more about these four people -- and the endless difficulties they face -- than you perhaps wanted to, and you walk out exhilarated and shaking all at once. (On the Ropes premiered in Austin at SXSW '99.) 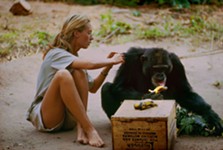 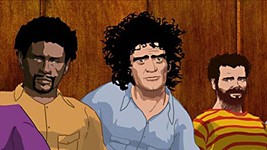