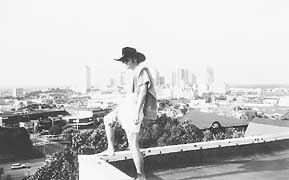 There's an old cowboy saying: “Any cowboy can carry a tune. The trouble comes when he tries to unload it.” Truer words couldn't be spoken for Dill Scallion (Burke), a young CMT wannabe who uses heartbreak and lucky boots to help him get to Nashville, where he finds heartbreak and an unlucky belt buckle the size of a hubcap. Fortunately for Dill, his Muleshoe, Texas, girlfriend (Griffin) is a slut and thus the inspiration for his hilarious overnight hit “You Shared You.” He leaves her behind and soon finds himself in a cushy, custom-painted bus with a new Nashville gal named Kristi Sue (Graham) and thousands of adoring fans doing his odd little self-invented dance, the Scallion Shuffle -- which also proves to be his downfall. This small indie film is shot in the now-common mockumentary style, a strategy that ever since This Is Spinal Tap has become de rigueur for band-on-the-road movies. Dill Scallion is chock-full of generous cameos (Priestly, Berg, and Wagner all provide delicious, bite-size chunks of cheesy characters) and Henry Winkler is remarkably restrained as the smarmy producer. Burke's Dill is engaging, but Graham steals the picture. Her Kristi Sue is a big ol' piece of pie -- sugary, light-as-air meringue with plenty of tart filling and boot-leather-tough crust at the bottom. As freshly scrubbed and neatly slicked and boyishly silly as a cowboy as on a Saturday date, Dill Scallion makes for a great night out. (An earlier version of this review appeared when Dill Scallion played SXSW '99.) 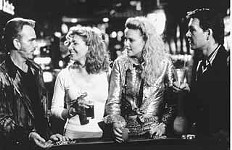 Waking Up in Reno
Not reviewed at press time. After sitting on the picture for more than a year, Miramax has finally seen fit to release Waking Up in ... 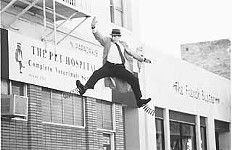