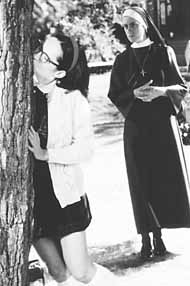 Fetishists of women's white cotton underpants will think they've died and gone to heaven when they attend a screening of Superstar, but let's hope their audience numbers are few -- and far between. Actually, I was hoping that in this day and age of Camryn Manheim dedicating her Emmy trophy to all the fat girls everywhere that Molly Shannon's popular Catholic schoolgirl character from Saturday Night Live, Mary Katherine Gallagher, would do this movie for all the awkward girls in the world. Well, a girl can hope, can't she? Superstar is not the movie that will catapult awkwardness into disease-of-the-week popularity, but that just may be too much to ask from a Saturday Night Live offshoot. These feature film projects have been spinning off from SNL sketches for a couple of decades now -- and sooner or later they're going to get it right. A funny character with a couple of trademark catchphrases does not on its own constitute a funny movie. Even at 82 minutes in length, Superstar feels uncomfortably stretched. Though she only smells her armpits a few times and falls over a stack of chairs only once, the attempt to give Mary Katherine some back history and home life is incredibly flat. There are a few decent yuks, but most of all Mary Katherine seems to evoke an uncomfortable empathy in viewers. Her desire to be kissed and to become a superstar are the motives that drive this movie. What I don't understand is why the Catholic League is all over a movie like Kevin Smith's soon-to-be-released Dogma (their protests provide good copy for the nightly news), and a movie like Superstar doesn't even cause a blip on their radar. There are things going on at St. Monica's High School that I'm sure would get their (cotton) panties in a wad. How does a scene such as the one in which a manifestation of God comes to Mary Katherine in her bedroom to advise her to “get jiggy with it” pass the League's blasphemy censors? Is there no justice? Or is it just true that Catholic school girls have all the fun? 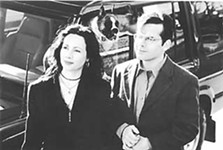 Dog Park
Kids-in-the-Hall alum McCulloch's directorial debut barrels out of the gate with a promising pedigree only to collapse just shy of funny and this side of ...