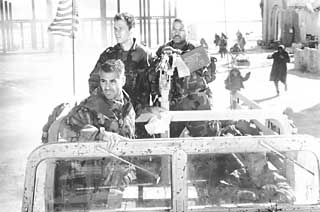 Few are the ways that remain to behave as an original outlaw or antihero in American movies these days. So it practically moves us to stand up and salute when Three Kings shows how sedition can, indeed, be an act of heroism. Three Kings is a war movie with a conscience, an action movie with a funny bone, a caper movie with a shifting agenda. This blurring of lines is not surprising, however, given the fact that the film springs from the creative mind of David O. Russell (based on a story by U-Turn's John Ridley). Russell is that odd-duck director, who, with his first two films gave us Spanking the Monkey, an amazingly funny and unforced drama about masturbation and incest, and Flirting With Disaster, a truly offbeat comedy about a grown man's search for his birth mother. The unsuspecting might have feared that Russell and his glam/pop stars, George Clooney, Mark Wahlberg, and Ice Cube, would give us little more than a Nineties reworking of the beloved Clint Eastwood/Telly Savalas war/heist movie, Kelly's Heroes, updating that movie's theatre of war from its WWII action backdrop to the 1991 Gulf War arena. But it turns out that Three Kings has more in common with Apocalypse Now than with Kelly's Heroes, using its premise of the renegade U.S. soldiers' search for Saddam's stolen gold much like Coppola used Captain Willard's trek upriver to find Colonel Kurtz. Both movies' frameworks provide their heroes with missions that help guide us through the wars' madness and pose moral dilemmas about the intentions of the order-givers and the expression of free will. Three Kings also has in common with such late-Sixties antiviolence time bombs as Bonnie and Clyde and The Wild Bunch its ability to shatter our yahoo reactions to gunplay and the mortal devastation of bullets by its use of highly stylized and startlingly visceral depictions of gunshot wounds and body cavities filling with sepsis. Oh, but this doesn't sound right. This review makes Three Kings sound too heavy, as if it's all about viscera and traitors and morality – and it's not. It's a good action movie with suspenseful sequences, witty dialogue and inserts, and enjoyable performances. The three primary leads all deliver quite dynamically, even if their fourth member – an ignorant hayseed played by Spike Jonze (the director of the soon-to-be-released Being John Malkovich) – is allowed to carry his performance a bit over the top. Making up for his excess is Nora Dunn's spooky-smooth portrayal of the story's TV war correspondent – a bullseye impersonation of a behind-the-scenes Christiane Amanpour-ish reporter who ruthlessly does what it takes to get her exclusive story. If this characterization veers too uncomfortably toward the bitchy side, we might chalk it up to the fact that Russell still clearly has “issues” with women (as his first two movies ably demonstrated). It could also be said that George Clooney's character, the nominal leader of the group, perhaps undergoes his moral transformation with too much alacrity and ease and not enough provocation. Nevertheless, when the moment comes to defy a specific U.S. policy in Iraq, there is no doubt we are witnessing the actions of desert heroes, of swamp rats with human hearts (even if one of them is crudely pumping with the assistance of mechanical tubing) instead of Purple Hearts. George Bush is the enemy and we are the camp followers. Three kings serve as our ambassadors.