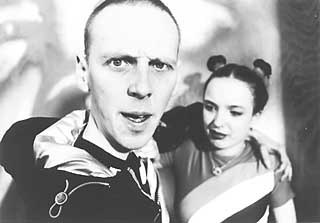 Call it Trainspotting 2, if you must, just don't confuse this trio of short films adapted from Scottish novelist Irvine Welsh's collection of the same name with Danny Boyle's groundbreaking Welsh-adapted tale of junkies down and out in the Edinburgh hills. Granted, with Welsh penning the screenplay, there are bound to be some similarities at work here -- the UK-icon-cum-voice-of-a-generation lives to drag his characters and their tortured syntax face first through the muck and mire of Scottish low-rent, drug-crazed awfulness. But where Mark Renton and the Trainspotting crew were fueled by China white and googly bathtub crank, the lads and lasses living in The Acid House are less victims of pharmaceuticals than suitable victims, of fate, folly, and bad fashion decisions. Tale one, The Granton Star Cause, revolves around Boab Coyle (McCole), a 4-F footballer dropped by his team, kicked out of his parent's home so that they can presumably have more quality sex time to themselves, fired from his job, and dropped like a hot spoon by his girlfriend all in the same afternoon. When he meets up with an unsavory-looking God while trying to drown his sorrows at the corner pub, he finds that the almighty hates him, too, and is promptly turned, à la Gregor Samsa, into a particularly annoying insect, which, in Welsh's world, serves him all the better. The second of the series, A Soft Touch, tackles the horrors of naïf Johnny's (McKidd) recent marriage to town slag Catriona (Gomez), a bitter, foul-tempered witch who promptly takes up with new neighbor Larry (McCormack), a preening, equally twisted hooligan who goes so far as to smash a hole in Johnny's roof to cadge free power from the hapless sap. Some people deserve each other, yes, but no one deserves these people. The final story, The Acid House, deals with a Northern Soul boy and general layabout Coco (Bremner, Spud in Trainspotting) as he OD's on a tab of Super Mario acid and wakes up in the body of the neighbors' baby boy. For all the supposedly maverick filmmaking going on here -- the wild angles, the ultra-chromatic colors, the ceaseless flurries of very, very bad taste -- the only thing holding the proceedings together is Welsh's lunatic dialogue, which is necessarily subtitled. Of course, at least half of Welsh's charm lies in his grittily hilarious exploration of the bowels of Scotland's disaffected lower classes and that country's overly addled youth culture. Still, The Acid House is a mess, albeit one with occasional flashes of brilliance. A Soft Touch stands out, not just because it's the only story with any sort of real protagonist, but also for its winningly grim performances. The rest of the ensemble collected here seems out too often to shock for shock's sake, something handled better and with far more wit and style by Danny Boyle and his group. Neither all that groundbreaking nor all that funny, these are undiluted Welshisms, and about as appealing as scrod yogurt. 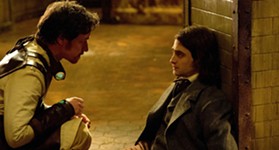