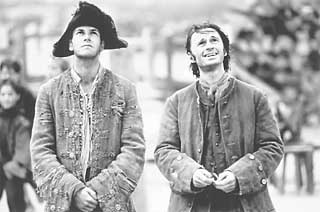 I always worry when a film's press kit trumpets the director's grand work in the world of television commercials; it seems to me that's something you'd want to cover up, like a past flirtation with Coors Light or a passion for Judd Hirsch films. It says as much for the state of film these days as it does about the director in question, I suppose, and Jake Scott -- son of Tony, nephew of Ridley -- enters the feature film fray with all the eye-candy gusto of a Puff Daddy video. He wears his lineage on his sleeve, imbuing this tale of 18th-century highwaymen with enough dandified muck and rainy-day spatter to make Uncle Ridley's friend H.R. Giger proud. Carlyle and Miller (last seen together in Trainspotting) play Plunkett and Macleane, the former a down and (literally) dirty bandit with an ax to grind against The Man, the latter a devout social climber permanently stuck on the bottom rung. The Man, in this case, is Thief Taker General Chance (Stott), a weasely, lower-echelon climber in the service of Lord Chief Justice Gibson (Gambon). When Plunkett and Macleane find themselves thrown in London's infamous Newgate Prison together, they conceive a mutually beneficial plan to rob from the rich as a team, employing Plunkett's street savvy and Macleane's inroads to the upper classes. All of this is set to a background of muddy knickers and ample, heaving bosoms. Scott, like his forbears, steals from the best -- there are elements of everything from Bonnie and Clyde to Butch Cassidy and the Sundance Kid on display here, usually to good visual effect (if not much else). Scott, too, has a knack for piling on the visual treats: a late-in-the-film shot of the gallows where the condemned dangle in the morning breeze, Plunkett and Macleane fleeing through a sewer to escape Thief Taker Chance, and the film's crashing opening -- all of these are stunning examples of cinematography, even if they don't really add much to the picture in terms of story development. That said, where Scott fails is in the picture's overall tone, which mixes period-piece derring-do with a modern score (jungle music?!) and a decidedly Nineties take on the 18th century. Plunkett and Macleane's verbal fisticuffs feel as though they were written by Quentin Tarantino after an absinthe bender; they're hip, they're happening, and they're hopelessly out of period. I know, George Roy Hill took a similar tack with the aforementioned Butch Cassidy, but this isn't George Roy Hill. It isn't even Richard Lester (helmer of 1979's Butch and Sundance: The Early Years). Carlyle, Miller, and Liv Tyler (who pops in and out whenever a pair of voluptuous lips are needed) are so firmly creatures of our time that watching them gallivant among the wigs and bodices of 18th-century London is akin to watching Keanu Reeves doing Shakespeare (though admittedly not nearly as entertaining). Rollicking is the term that best sums up Plunkett and Macleane, not in itself a bad thing, just, I think, not a very good thing. 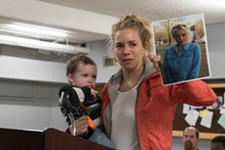 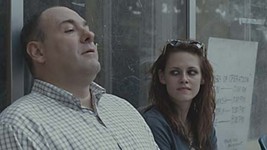