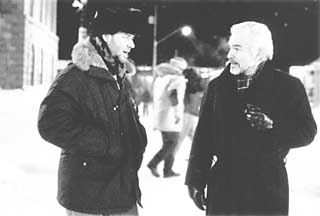 After taking home a raft of Emmys for his work on The Practice and Ally McBeal the other day, writer David E. Kelley need not feel he has to toil in the fields of feature film scriptdom anymore. With the recent Lake Placid and now this feel-good, romantic hockey drama finally out, Kelley is threatening to inundate moviegoers with his peculiar brand of soggy comedy-drama, a fate we'd all be better off without. Teaming with Austin Powers helmer Roach, Kelley (one of Mystery, Alaska's co-writers and producers) has managed the downright amazing feat of leeching any bit of action, excitement, or, for that matter, mystery out of the sport of hockey, and replacing it with tried-and-true castoffs from the situation dramedies he knows all too well. An eclectic ensemble cast ranging from the down-under insouciance of Crowe to the wheedling narcissism of Azaria and Reynolds makes Mystery, Alaska at least an interesting vehicle for some of the better character actors out there, but, thanks to Kelley's vacuous scripting, it's all you can do not to care about the proceedings. The film's setup -- that the local, Saturday-afternoon hockey team in this Alaskan outback has been chosen to play a one-off game against the formidable New York Rangers -- is rife with possibilities, but Roach and Kelley squander each and every one of them in favor of tired, predictable romantic mudslinging and an avalanche of clichés you'd need a fleet of HeliVac choppers to rescue you from. This is all Kelley's territory, I suspect, he of the prime-time earnestness and treacly storylines, though Roach does his bit by managing to turn one of the most pristine, gorgeous environments on earth into a solid wall of dead white space, hovering in the distance just above Crowe's sullen glare and right below Davidovich's kittenish pout. This is Alaska? It looks more like the North Pole. Kelley tosses in the usual complement of clichéd characters -- the horny upstart, the towering naïf, the born leader who doesn't want to lead, the omniscient overlord -- to little or no effect, rendering a film that focuses on one of the most unpredictable of sports utterly predictable. Mystery, Alaska's romantic subplots (of which there are many and which have been the focus of the film's recent female-friendly marketing campaign) might be of interest to those with a distaste for Zambonis and dentifrice-shattering slap shots, but the bottom line with the film is that there's just no damn mystery about it. Better this were called Obvious, Alaska or perhaps Foregone Conclusion, Alaska. Anything but Mystery. To be fair, Crowe handles his cut-and-dried role with aplomb, investing a wooden character with at least as much life as Pinocchio, but sadly that's not enough. Where are Slap Shot's Hanson Brothers when you really need them?