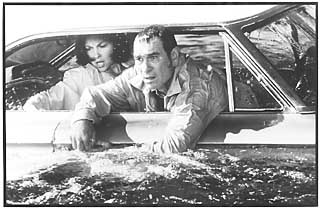 I'll take “sappy, implausible thrillers” for a thousand, Alex. On second thought, don't bother. Bruce Beresford's (Driving Miss Daisy) Double Jeopardy is predictable piffle, a comically unbelievable story that leaves almost no impression except what a sham our legal system is. Plucky Ashley Judd plays Elizabeth Parsons, whose cozy life is shattered when hubby Nick (Greenwood) fakes his death and frames her for his murder. Convicted and tossed in the slammer, Elizabeth discovers the ruse, whereupon a cellmate and former lawyer (apparently not a very good one) clues her in on double jeopardy, a nifty constitutional provision assuring that no one is tried for the same crime twice. After a scant six years, Elizabeth is released from jail only to skip parole with vengeance on her mind and a .38 special tucked in her jeans. It's less complicated than it sounds, and while we're on the subject, it's less interesting than it sounds, too. Scenes that should be tense, like Nick's gore-splattered, blood-on-Brie crime scene, are about as scary as putting your hands in spaghetti, since anyone who's heard the premise already knows a good 80% of the plot twists. The only thing that is surprising is the insulting neglect that screenwriting duo David Weisberg and Douglas Cook (The Rock) give to things like logic, reality, and common sense. As an alcoholic parole officer, Tommy Lee Jones is as tough and salty as beef jerky, but it's little more than a pleasant distraction. Fans of kitschy cinema may enjoy whooping with delight while wee Ashley kicks butt and fires one-liners, but there's not enough cheap titillation to truly merit a recommendation as “quality trash.” Instead, Double Jeopardy seems to be presenting itself as a serious nail-biter -- and that's seriously funny.

Mao's Last Dancer
In this film based on a true story, a Chinese ballet dancer defects to the U.S. when he falls in love with a Houston dancer while on tour.