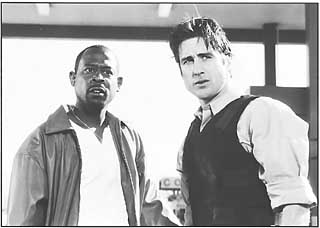 Call this one Beverly Hills Cop: 1999. Presumably because he's also black and funny, Martin Lawrence has been shunted into the Eddie Murphy role in this new cop comedy/caper movie. Lawrence is undeniably black and funny, but it is an insult to his unique comedic talents to be typecast in this manner. And though Lawrence is dependably good in both the action and the comedy sequences in Blue Streak, there is very little here for him to sink his teeth into. The same goes for the rest of the cast, although Luke Wilson does get to showcase his pleasantly understated comedic style. (Speaking of Wilson, two movies in which he stars are currently playing on Austin screens: Blue Streak and Dog Park. His brother, Owen Wilson, appears in The Minus Man, which also opens this week in Austin. Co-starring in The Minus Man is Janeane Garofalo, who also co-stars in Dog Park, which debuts this week. There's no point to this observation other than to point out the truth of it being a case of either feast or famine.) Lawrence plays a jewel thief who stashes a $20-million diamond in the air-conditioning duct of a construction site during a robbery gone awry. The next shot shows him being released from prison two years later and, following a gratuitous scene to visit his old “girlfriend,” he goes to retrieve the jewel only to find that the construction site has turned into an LAPD precinct. He logically decides to pose as a cop to gain entry but before he discovers his waylaid gem, he inadvertently foils a couple of crimes -- just like a real cop. If the mediocrity of Blue Streak weren't depressing enough, the concluding morality of the final scene, which suggests that crime does pay, seems an appropriate metaphor for this movie's huge success at the box office. 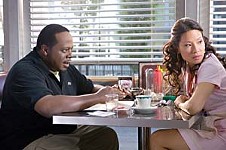 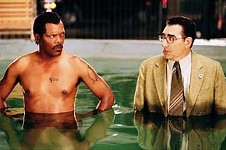 The Man
Samuel L. Jackson and Eugene Levy have starred in bigger stinkers, but this wheezing comedy may herald the death knell of the interracial buddy-cop farce.