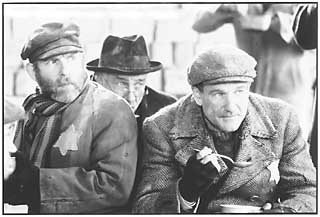 There are going to be a lot of people who regard Jakob the Liar as simply an Americanized version of Life Is Beautiful since both films deal with similar themes and backgrounds. For fairness' sake, then, it ought to be pointed out that Kassovitz's film is adapted from a 1969 novel by Lodz ghetto survivor Jurek Becker, and that the film was in the can before Roberto Benigni's Oscar-winner was even released. That said, there are a lot of similarities between the two: Both deal with the Holocaust, both use humor to do so, and both end with a tragedy which is then marginally uplifted by a revelatory epilogue. They're also both telling examples of how difficult and loaded a task it is to attempt a fictional film about the experiences of European Jewry under the Third Reich, especially when using humor as a touchstone. Perhaps, as Jerry Lewis did with his own “lost” Holocaust comic horror show, The Day the Clown Cried, filmmakers ought to give it up altogether and focus solely on the dreadful juggernaut of the event. Spielberg's Schindler's List, Cavani's The Night Porter, Resnais' Night and Fog -- maybe it's best to stick to the dramatics and the documentaries. How can you humanize, however carefully, an event that produced a children's book titled I Never Saw Another Butterfly? Maybe you can't. As long as there are intelligent artists out there, however, someone's going to keep trying, and Kassovitz, himself a survivor of the camps, puts his heart into the job. That doesn't mean Jakob the Liar is a good film -- it's not, really -- but you can't fault the filmmakers for not giving it their all. Williams' second-phase career as a humanist patho-comic comes to the fore here. As Jakob Heym, a widowed, beaten resident of a nameless Polish ghetto in the waning days of the Nazi occupation, he's like Isaac Bashevis Singer's Gimpel the Fool, noble despite his inability to act. When he inadvertently overhears a German radio transmission mention that Russian troops are within 500 miles, he quietly passes the welcome news on to his friend Mischa (Schreiber), who naturally passes it on to everyone else in the ghetto, simultaneously giving rise not only to sudden hope, but to the notion that Jakob is in possession of his own personal radio, an offense punishable by death. With a young war orphan in his care (Gordon) and a whole township suddenly depending on him for moral and spiritual sustenance, Jakob finds himself perpetuating the myth, at the risk of his own life and lives of his friends, by making up faux BBC broadcasts replete with Churchill's rumbling, stodgy baritone. The cast -- Balaban and Arkin especially -- supersede the material at points, but in the end the film is oddly unmoving. Characters and actions merge into a gray blur, and the broadly drawn Nazis fare no better. At the risk of sounding disconnected, Jakob the Liar feels sterile and chilly; the humor -- Yiddish and otherwise -- falls flat, and sadly, so does the film.