Its title bluntly suggests the impersonal, the emotionally detached, but that's just an illusion: Trick is as sweet and sublime as any recent movie has come. The film's premise is deceptively simple -- two guys meet on a Manhattan subway one evening, and then spend the rest of the night looking for a place to shag -- but as Gabriel and Mark's futile odyssey progresses, their relationship becomes more complicated, as lustful impulse gives way to emotional attraction. It's a long night's journey into day, a romantic interlude that may very well be the first gay date movie that's equally accessible to straight couples. The kick in Trick is watching the unexpected spark kindle between these two strangers, in large part because it comes as such a surprise to both of them. Who would have thunk that this odd couple, a hunky go-go boy and a cherub-faced songwriter, could click in a world of preconceived notions? While Campbell and Pitoc make for an appealing pair of moonstruck characters, it is Campbell's shy performance as Gabriel, the struggling artist trying to break into Broadway, that sticks with you longer. He's the movie's center. Screenwriter Jason Schafer references musical theatre clichés throughout Trick as a means by which to inform the movie's romance, but this touch is light, never heavy. While the strength of this movie lies in its unassuming tenderness, its raucous humor is equally memorable. There's a wacky, surreal vision of the world here, one in which the normal course of events is bizarrely interrupted by a claustrophobic confrontation with a bilious drag queen in a men's bathroom, an impromptu therapy session conducted by a topless mediator, and a fabulous Tori Spelling in the often hackneyed role of the best friend. As an earnest but talentless actress, Spelling is game for anything in Trick, giving a performance so guileless and entertaining that it's close to brilliant. Whether she's badly singing and dancing or mindlessly rambling on about something, Spelling lays it on the line without a shred of self-consciousness. (Think Candice Bergen's breakthrough role in Starting Over.) After seeing her here, you may never again think of her as a Beverly Hills brat. And that's a Trick fitting for Houdini. 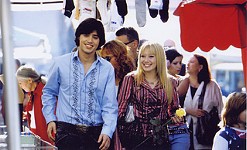 The Lizzie McGuire Movie
The title says it all, really. The adorably klutzy heroine of Disney’s eponymous TV series jets off to Rome after her momentous junior-high graduation, but ...