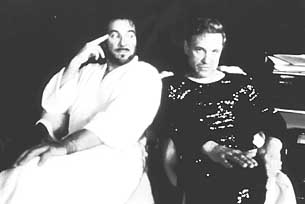 There's honor among thieves, loyalty among family members, and love between lovers. It gets complicated, however, when all these traits and associations become the ties that bind the same three people. This is the turf explored in The Trio, a German comedy about an intricate love triangle and its attendant work relationships. Zobel (George) and Karl (Redl) are a longtime gay couple who live in a trailer home with Zobel's grown but tomboyish daughter Lizzie (Hain), who was born of a heterosexual indiscretion in Zobel's youth. Together the three travel the area, going to shopping malls and airline terminals, making their living as pickpockets. Working in tandem, they have a few basic scams with which one will distract the victim while another lifts his wallet. All is well with this way of life until Karl becomes gravely injured during a hasty getaway. Lizzie finds as a replacement the town misfit, Rudolf (Eitner), a young man who writes bad poetry and keeps a pet snake. Rudolf rapidly takes to the family trade; father and daughter both take rapidly to the rough trade in their midst. Each of them ends up sleeping with the compliant Rudolf but each party keeps it secret from the other until, of course, the inevitable happens. Still, there remain several twists and turns in this unconventional story as the family, the lovers, the workmates all work things out to their own satisfaction -- including an amusing coda that promises hope for the future. Perhaps most unconventional of all is the story's nonjudgmental nature, not just in relation to the sexual arrangements among the characters but also in its lack of critical distance from the characters' occupation. Director Hermine Huntgeburth isn't looking to punish these characters for their misdeeds or make them seem unappealing or flawed. In fact, in some ways, the movie toys with our preconceptions: Götz George is one of Germany's best-known actors popular for his portrayals of extremely macho characters, thus casting him as The Trio's gay patriarch with a roving eye is a cultural twist. Huntgeburth's camera captures this “family” with a gritty naturalism: This is not the Germany of picture postcards and travel brochures but rather the dreary dailiness of life on the margins. Neither brigand outlaws nor conformist wannabes, this group seems an ordinary bunch who just want to be left alone to live their lives. Or maybe not … the problem with The Trio is that we really come to know very little about these seemingly interesting characters. Despite excellent performances, these characters reveal very little of themselves and their needs and desires, especially the bisexual Rudolf, whose motivations are at best unclear. As a movie, it suffers from having a great setup but too little follow-through. After the premise is made clear, the movie finds itself at loose ends with intriguing but undeveloped ideas blocking its momentum. Still, intriguing ideas are at least half the battle and in that The Trio scores big.