A Dog of Flanders

You can take your child to see this adaptation of the classic children's tale, but don't blame me if you end up with a juvenile delinquent 10 years down the road. “Preachy” doesn't even begin to cover all the negative bases Brodie's film touches upon, though it's as good a place to start as any. There's also “shameless,” “silly,” and – sin of sins – “boring.” Add to that the film's relentlessly downbeat tone and mixed message – something along the lines of “follow your dreams and vultures might just pluck the eyes from your frozen carcass,” and you have a children's film more suited to Wednesday Addams than Everykid, USA. James and Kissner play young and marginally older versions of Nello Daas, a scrappy 17th-century orphan (mother dead, father MIA) in Antwerp, currently in the care of his grandfather Jehan (Warden). Poor but happy, Nello fills his days by helping gramps sell fresh milk in the city, and the rest of his time developing his innate artistic skills, sketching out crude portraits of his best girl Aloise (Sweeten and Monet as young and old versions of the girl). No stranger to hardship, Nello finds himself badgered by the pugilistic fates throughout most of his young life, accused of arson, denied his rightful artistic rewards, and separated from his true love. It's enough to drive a boy to graffito, but Nello admirably chooses to persevere against all odds and pursue his dreams. Aid comes in the form of Jon Voight's Michel Le Grande, a local artist of some renown, who takes the urchin under his wing and helps him out as best he can. Alas, it's not nearly enough, as Nello continues to be besieged by countless cruelties. His only friend is Petrasche, a huge shaggy Flanders dog he's rescued from a life nearly as sorrowful as his own. Now I know that children's films are bound by stringent, unwritten laws that require them to contain any number of useful moralistic lessons, but A Dog of Flanders ventures beyond the pale and ends up becoming an exercise in unvarnished irritation. Apart from the veritable feast of clichés that litter the script like dogbombs on a kennel floor, there's also enough stilted, laughable dialogue to pen at least two new Ed Wood films, not to mention an embarrassingly tacky “mommy's in heaven” sequence toward the end that must be seen to be disbelieved. On the plus side, there's some nice location work. But that's it. A sad, sad take on an already tearful tale, A Dog of Flanders is toothless tearjerking at its worst. 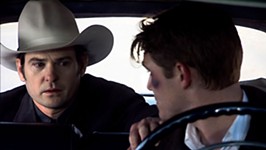 The Last Ride
The last few days in the life of Hank Williams are portrayed in this plausible film re-creation. 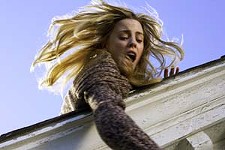 The Amityville Horror
A dream home on Long Island is not all it's cracked up to be: The family inside sees dead people.