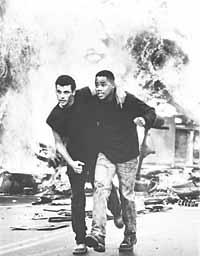 As Labor Day passes, triggering the inevitable retail flurry of Sizzlin' Summer's End Sales, Hollywood follows suit with its annual inventory dump of duff action movies that didn't quite make the grade for midsummer release. Chill Factor perfectly exemplifies the type: derivative concept, rookie director, second-tier cast, and a virtual guarantee of blurry-fast delivery to the New Arrivals rack of your neighborhood Video Barn. The plot hook is almost refreshingly blatant in its unoriginality. Two lowly blue-collar dudes from Montana (Ulrich and Gooding) inadvertently come into possession of an experimental chemical weapon stolen from a nearby military lab. With leather-clad, peroxide-haired baddies on their trail, they embark on an extended chase sequence/male bonding rite, piloting Gooding's stolen ice cream truck down twisty mountain roads while keeping one nervous eye on the thermometer. Their canister of green goop, you see, will explode if its temperature hits 50 (the same magic number, you may recall, that figured so prominently in a certain other high-velocity action blockbuster a few summers ago), incinerating everything for hundreds of miles around. From a strictly commercial standpoint it's hard to second-guess Johnson's taste in thematic pilfery. However, I did find myself musing that the tension level might've been higher if the action had been set in, say, the Chicago or L.A. metro areas rather than in Montana, where 99 percent of the casualties would be livestock and deranged militiamen. (What's the matter; if minimal endangerment of life was the goal, weren't Greenland and Nova Scotia available?) Gooding and Ulrich aren't the worst obligatory biracial buddy-pic duo ever to hit the screen. Gooding's enjoyable Type-A raving blends well with Ulrich's sulky hunk persona, and their chemistry helps offset the par-for-the-course character development. Also turning in enjoyable (in context) work is Paymer as the Zen-masterly chemist who invented the fearsome weapon. Paymer's amusingly bombastic pronouncements about the metaphorical resonance of fly fishing provide the story's main recurring motif, which the screenwriters sustain -- for no apparent reason other than the sheer challenge of it -- like champs. Finally, fans of Xena: Warrior Princess will enjoy the chance to drool over semi-regular Hudson Leick in tight leathers and a spunky punkette 'do as the obligatory killer femme villain. Otherwise, the pervasive feel of clock-punching industrial filmmaking at its dreary nadir makes Chill Factor a marginal bargain, even by low seasonal-clearance standards. 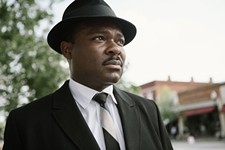