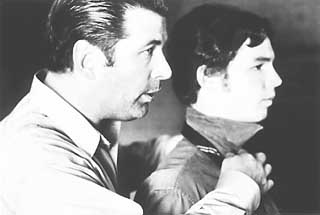 Outside Providence is a sweet and funny coming-of-age movie set in 1974. Despite charting no new ground for the genre, the movie still does what it does extremely well. Beguiling performances and a story that veers between social observations, period detail, and genuine humor make this movie an end-of-the-summer stand-out. Distribution company Miramax Films is doing itself no real favors by pushing Outside Providence as a Farrelly Brothers project. True, underscoring this movie is the imprint of brothers Peter and Bobby -- the duo whose names have become synonymous with the rise of lowbrow humor on the basis of their phenomenal success with such films as Dumb & Dumber and There's Something About Mary. Peter Farrelly wrote the novel on which Outside Providence is based back before he was a force to be reckoned with in the “lowering” of American taste and before he discovered the profit motive in playing dumb -- and dumber. A semi-autobiographical coming-of-age story, the novel was optioned for a buck by another Rhode Island native, Michael Corrente. Both the Farrellys and Corrente share screenwriting credit. The print advertising seeks to lure people in with its suggestion of a bawdy limerick and further Farrelly flash, but the tactic runs the chance that the opening-weekend audiences will leave disappointed because Outside Providence -- despite being a likable and entertaining picture -- is not exactly the movie it's billed as being. In general, the Farrelly touch is softened here, although the movie is not without its gross-out moments (like the spaghetti strand slurped playfully through a character's nostril). Nevertheless, this story seems more suited to the sensibilities of director Corrente, who in his previous films Federal Hill and American Buffalo showed his aptitude for revealing the inner stories of neighborhood lowlifes. In Outside Providence Hatosy gives a memorable performance as Tim Dunphy, a blue-collar teen who lives with his three-legged dog, crippled brother, and gruff but tender single dad (Baldwin, in a performance that is sure to be remembered come awards time). Tim hangs with his ambitionless friends -- carousing, lying about girls they've slept with, and smoking pot. But a fender-bender with a police car prompts Old Man Dunphy to call in some favors and get his son enrolled in private school. There Tim is a fish out of water. But instead of all the standard jokes and conventions, Outside Providence walks an unpredictable line between some very funny comic moments and more serious dramatic scenes. In some ways this portrait of the private school is reminiscent of the tongue-in-cheek tone of the recent Rushmore. A little too many character tangents and color may throw the movie off balance once in a while (like the surprise that stupefies Old Man Dunphy and his gay-baiting poker cronies), but, all in all, Outside Providence is a refreshing place to visit.

READ MORE
More Michael Corrente Films
A Shot at Glory
It might sound like a fairly standard sports movie transplanted to the Scottish Highlands -- the underdog minor leaguers from the tiny burg of Kilnockie ...