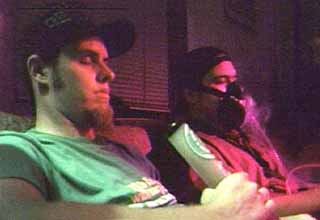 This bracingly sordid slice of microbudget punk-rock cinema from Super-8 maestro Bob Ray makes it clear that, despite a step up to 16mm, the Austin-based, self-taught filmmaker hasn't compromised much of the flagrantly deviant sensibility he flaunted in earlier opuses such as Night of the Kung Fu Zombie Bastards From Hell! and Cocaine Ninja. Rock Opera bubbles up from the same primordial college-town underground ooze as the starving bands/bad drugs/chronic penury lifestyle it simultaneously lampoons and celebrates. Its story is a picaresque affair dealing with the efforts of a sad-sack punk guitarist named Toe (Clark, a musician pal of Ray's and a comic actor of terrific innate gifts) to sell enough weed to bankroll a low-budget tour for his band. Much of the (exceedingly) dark humor arises from watching our benign but omni-incompetent hero screw it all up in spectacular fashion, drawing down the wrath of rival bandsmen, creditors, and psychotic drug traffickers. As a favorite son of the local punk scene, Ray knows his turf inside out. Even those who've experienced it only peripherally will get a charge out of spotting beloved Austin bands, clubs, hangouts, and personages (watch closely for cameos such as Butthole Surfer Jeff Pinkus as a doorman). Ray's writing is crude but often hilarious, and his sociological observations -- such as the phenomenon of "band houses" as the equivalent of rival feudal estates -- are astute. He's a bold, imaginative shotmaker too, with an especially good feel for scenes in which explosive, chaotic action develops slowly from ominous static situations. But if I were Ray, I'd be leery of buying too quickly into the premature lionization that seems to be part and parcel with the explosion of interest in indie cinema. He still needs to develop more of a sense of the editing room as his friend; Rock Opera contains too many redundant scenes, resulting in a movie that feels much longer than its 87 minutes. He's also a bit too enamored of "novel" camera angles -- in this case a superabundance of low-angle interior shots. And as Linklater has learned, even bohemian enfants terrible eventually face pressure to prove they can move out of their comfort zones and make movies in which none of the characters sport gas-station-attendant shirts or hemp-leaf tattoos. Although many find similarities between Ray's work and that of Slacker-vintage Richard Linklater, I believe a more analogous talent, and more appropriate, artistic benchmark, might be Canadian filmmaker Bruce McDonald (Roadkill, Hard Core Logo), who's enjoyed a long, meritorious career making idiosyncratic low-budget movies about compelling characters who live on the fringes by choice or circumstance. Bob Ray may or may not be the Next Big Thing out of Austin, but he's already turning out exuberantly rough-edged films that are a blast to watch. And for now that's fine by me.

Hell on Wheels ... and Weed
Bob Ray takes the show on the road

You Drink, You Drive, You Spill!
Bob Ray's PSAs for Drunk Drivers of Texas