Albert Brooks has always been the poor man's Woody Allen, a perpetually harangued schlub, the nexus of bad luck and ill fates. His appealingly cosmetized vitriol has carried a number of superior films (Modern Romance, Lost in America) and an equal number of mediocre stumblings (The Scout, Defending Your Life), but with The Muse, written with longtime collaborator Monica Johnson, Brooks tackles his largest and perhaps most personal bugaboo: the Hollywood system and creativity in general. You'd have to go back to Robert Altman's The Player to find a more acidic glare at the nebulous dealings in Tinseltown, though Brooks' touch here is lighter, and played with marginally less venom; he's not out to vituperate, he's out to needle. Brooks plays screenwriter and family man Steven Phillips, who one day takes a lunch meeting with a fictional Paramount executive to discuss his new script only to be told he's “lost his edge” and his services are no longer required. Understandably aghast at this turn of events, Phillips relates his tale of woe to fellow scribe Jack Warrick (Bridges), who in turn sets up Steven's fractured ego with an honest-to-goodness muse named Sarah (Stone). Daughters of Zeus, the Muses are allegedly the inspiration from which all human creativity flows, and needless to say, Steven is shocked to find out they truly exist. Nonetheless, he readily agrees to become her client -- if that's what it takes to regain his creative edge. The Muse chronicles the pair's dealings, and also those between Steven's wife and Sarah, while it gently skewers Hollywood's fickle whims. It's not exactly tough love, but it's close, and it results in one of Brooks' more heartfelt films in a while, though he never really takes off the kid gloves and gives Hollywood's treatment of its writers the unmitigated savaging it so richly deserves. This is venom lite, and that's never more evident than in the cavalcade of cameos who wander through The Muse. Everyone from Martin Scorsese to James Cameron (who is told by the muse to “stay away from the water”) is seen approaching Sarah for advice. It's a terrific semi-running gag that just keeps going. Stone is clearly relishing her role, playing Sarah with all the petulant élan of a consumeristically inclined sorority sister, though a final-act revelation about her character threatens to deflate the entire film. Brooks, who as both actor and director begins the film in high thematic style, seems determined to peter out by the final third. An extraneous subplot regarding his wife, Laura (MacDowell, looking less pinched than usual), and Sarah's influence upon her seems out of place, and the final scene is just too pat for what has come before. Those quibbles aside, The Muse is one of the more intelligent comedies out there this summer -- it's not Brooks' best, but trust me, you could certainly do worse. 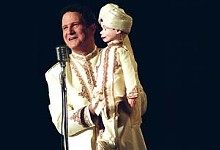 Looking for Comedy in the Muslim World
Albert Brooks again sallies forth where others fear to tread, although his comic results are more mildly amusing than riotously funny. 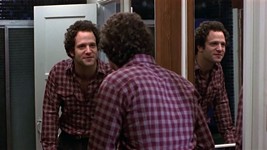