… or perhaps not deep enough. Either way, this undercover cop saga by Aussie director Rymer (Angel Baby) comes off as a simplistic morality tale rife with moments requiring forehead-slapping suspension of disbelief and precious little in the way of overt tension. Like so many other offerings in the recent wave of neo-blaxploitation films, Rymer seems content to exhume the ghosts of genre triumphs past instead of blazing new ground. Toward that end we get Grier, the grande dame of resuscitated 'hood cinema, as Cincinnati detective Angela Wilson, a tough-talking, take-no-prisoners cop assigned to an undercover operation aimed at taking down the city's narcotics kingpin. That's LL Cool J, as God, the quasi-benevolent, Don Corleone-like head of the Cincinnati underground, a pool-cue-wielding maniac while at work and just your average family Joe once he's done garroting the double-crossers on his turf. Grier's part is little more than a cred-sustaining cameo; the true crux of Rymer's film is Epps' deep-cover officer Jeff Cole, who, fresh out of the Academy, persuades his superior officer (Tucci) to send him in after God (this despite Cole's rookie status). Once inside, Cole is faced with that most reviled of career options: waste a civilian to cement his position in God's ranks, or bail while there's still time. That choice is irrelevant here, though. What matters is that Cole's superiors increasingly see him as a threat to himself and the department: He's gone so far inside, assumed so much of a false identity in order to get close to his prey, that he ultimately begins to lose his true self. Tough break. The conceit is hardly new, though for a while Rymer, working from a serviceable script by co-writers Michael Henry Brown and Paul Aaron, manages to keep it fresh through sheer willpower. The opening half of In Too Deep rushes along like a jacketless ricochet from a hot Sig Sauer, aided and abetted by some clever shooting from director of photography Ellery Ryan and whiplash edits courtesy of Dany Cooper. Once the mental processes of Detective Cole become enmeshed in the perpetual strain of maintaining his false identity, though, the plot backpedals into a continuing series of “What the hell?!” situations and one very tired romance (with Long, as an artist's model whom Cole meets while taking a department-mandated breather). LL Cool J, as the psychotic drug overlord (and really, there's got to be some other kind) is the most invigorating thing on the screen: He moves his beefy, muscular bulk from scene to scene with the calm, predatory self-awareness of a panther, and when his eager, too-friendly eyes light on a victim, he's more of a threat than anything else in the film. He's also overacting, but you can tell he's having a ball at playing this obvious madman. Despite Cool J's obvious charm, Rymer's film, one of several picked up by Dimension Films (a Miramax subdivision) to target the urban markets of late, is too sloppy, pinning psychological crime dramatics to good old-fashioned gunplay, and as such, it's neither here nor there. 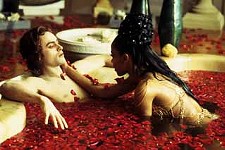